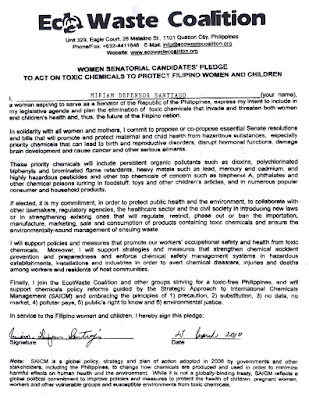 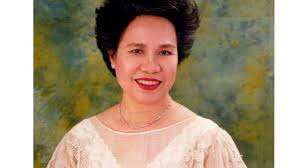 The EcoWaste Coalition joins the Filipino people in honoring Sen. Miriam Defensor Santiago who passed away today at the age of 71.  We consider Miriam a friend and our indefatigable champion at the Senate on waste and toxic issues.  In keeping with the pledge she made in 2010 to include hazardous chemicals in her legislative agenda, Miriam filed at least 75 bills and resolutions in the 15th and 16th Congress that tackled chemicals, products and wastes, which threaten maternal, child and environmental health, including a bill banning single-use plastic bags, a bill restricting cadmium, lead, mercury and hexavalent chromium in packaging and   a bill establishing a Pollutant Release and Transfer Registry.  Among our lawmakers, Miriam distinguished herself as the Senator with the sharpest eye for waste and toxic issues.  In fact, during the last six years, she pushed for legislative inquiries and measures on a litany of health and environmental topics raised by the EcoWaste Coalition – from Bisphenol A in children’s products, mercury in skin whitening cosmetics, lead in paints and products such as toys,  health hazard posed by loombands and toxic adhesive used in artificial nails.  More recently, Miriam advocated for the return of the illegal garbage shipments from Canada.  In response to the election survey questionnaire that we sent to all the 2016 presidential candidates, where she emerged as the “greenest,” Miriam declared that:  “We must not process the waste in the Philippines, as it sets a dangerous precedent. If we allow one country to turn the Philippines into a garbage dump, we are telling all other countries that they can do the same.”  She added: “If elected, I will invoke the Basel Convention to force Canada to take back the trash it dumped on Philippine soil.”  Had she won the presidency, Miriam would have promoted the ratification of the Minamata Convention on Mercury in her first 100 days in office.  Had she won last May, she would have immediately rescinded the guidelines adopted by the National Solid Waste Management Commission allowing thermal waste-to-energy facilities in violation of the Clean Air Act’s ban on incineration. Miriam thrice failed in her bid to become the President of the Republic of the Philippines, but in our heart of hearts Miriam was our legislative champion in building a toxic-free nation that we, the people, continue to fight for.
Email Post