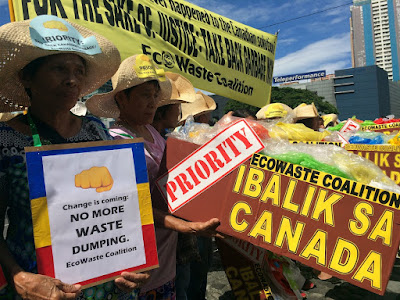 Complainants-in-intervention against parties who imported garbage from Canada lauded a court order to send the illegal shipments back to its origin.

Ang Nars Party-List, Public Services Labor Independent Confederation (PSLINK) and the Sentro ng mga Nagkakaisa at Progresibong Manggagawa (SENTRO), together  with the EcoWaste Coalition and the Global Alliance for Incinerator Alternatives and three individuals, are intervenors to Criminal Case No. 14-311191 versus importer Adelfa Eduardo and customs broker Sherjun Saldon for violation of RA 6969 or the Toxic Substances, Hazardous and Nuclear Wastes Control Act.

“The intervenors are grateful to the court for upholding their legal position that disposing of the imported wastes locally violates our laws and for invoking provisions of RA 6969 to order the transport of these wastes back to Canada,” said lawyer Armand Mejia, counsel of the EcoWaste Coalition and the other complainants.

As stated by Judge Tita Bughao Alisuag of the Regional Trial Court of Manila (Branch 1), “the Court sides with the intervenors that the disposal and destruction of the wastes will violate equally important environmental laws such as RA 9003 or the Ecological Solid Waste Management Act and RA 9275 or the Clean Water Act.”

In denying the motion of the prosecution for the local disposal of the imported trash from Canada, the lady judge pointed out that our country is not a “trash bin,” emphasizing “this should not be made a precedent for other countries to follow.”

“We intervened in the motion filed by the state prosecutors, representing the inter-agency committee composed of the Bureau of Customs, Department of Environment and Natural Resources and Department of Foreign Affairs, for the immediate disposition of the botched garbage shipments. Our motion in legal intervention was filed purposely to stop the wastes from being disposed of in local facilities. We invoked the civil liability of the importers to ship back the imported waste to Canada pursuant to RA 6969 and other environmental laws,” explained former Rep. Leah Paquiz of the Ang Nars Party List, which has been fighting the Canadian dumping issue since 2013.  “We thank the court for affirming our sovereign right to protect our country from dumping.”

Judge Alisuag had ordered that the 50 container vans containing  mixed Canadian garbage, including used adult diapers,  be returned to its origin and that the importer shall be under obligation to send them back pursuant to RA 6969.

“This is a victory for our people and for the environment.  But the fight is not yet over.   Now we need to ensure that the decision is faithfully carried out.  That every last piece of garbage from the 103 shipping containers sent to our country is taken back to Canada, including those that were already landfilled,” said Josua Mata, Secretary-General of SENTRO.

For her part, Annie Geron , General Secretary of PSLINK, said: “This is a concrete outcome of the people’s collective efforts in defense of ourselves and the environment.  We should remain vigilant and maintain our unities to ensure full compliance to the court order and hold to account the importers and the Canadian government.  Ibalik ang kahuli-hulihang hibla ng basura.”

SENTRO, PSLINK and other labor groups had previously said that returning the garbage shipment to Canada for treatment in appropriate facilities with functional pollution control measures will protect Filipino workers at local ports and waste disposal plants against occupational exposure to biological, chemical and physical hazards from the reeking trash.

It will be recalled that 103 container vans of largely residual household garbage mis-declared as scrap plastics for recycling were illegally exported to the Philippines from Canada from 2013-2014.

Last year, garbage from 26 of these containers was illegally disposed of at Metro Clark Sanitary Landfill in Tarlac, enraging provincial officials and their constituents and buttressing the demand against foreign waste disposal in local facilities.