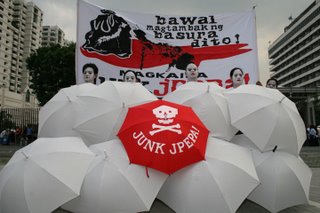 9 November 2006, Pasay City. Youth green warriors from the Ecowaste Coalition dramatize in front of the Japanese Embassy and the Philippine Senate what they view as devastating “waste colonialism” if the controversial Japan-Philippines Economic Partnership Agreement (JPEPA) is ratified and implemented. The “toxic accord” would decriminalize the dumping of toxic wastes forbidden by the country’s environmental laws. The Ecowaste Coalition and other concerned groups are calling both the Japanese Diet and the Philippine Senate to reject the agreement. The creative protest event was held to mark the second month of the signing of JPEPA by Pres. Gloria Arroyo and then Prime Minister Junichiro Koizumi on 9 September 2006.

“Where is the logic and sanity in opening the country’s doors to a long list of extremely toxic wastes from outside, when we know very well that we have yet to succeed in handling our own?,” asked the Ecowaste Coalition in a statement, reiterating that “we strongly object this ugly form of modern colonialism through the liberalization of trade in toxic wastes.” 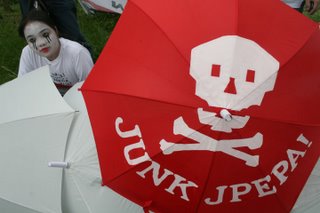 “Tambakan na lang ba tayo ng basura? Hindi pa ba sapat na problema ang mga iligal na tambakan na hindi maipasara-sara?” For the millions of Juan and Juana de la Cruzes, that is the question. Already our environment is visibly deteriorating from the effects of our own mismanaged municipal, medical and hazardous discards. Are our policy makers blind to this?

The Ecowaste Coalition, a participating group of the Magkaisa Junk JPEPA coalition, cites the following facts to support its stance against any form of waste dumping, be it by Filipinos, Japanese or other nationals:

Annually, 8.4 million tons of wastes are generated by 85 million Filipinos. In Metro Manila alone, 85% of the trash generated daily end up in storm drains, creeks, rivers and the Manila Bay.

Our local hospitals, clinics and other generators of infectious wastes are still scrambling to cope with the requirements of the law on the proper treatment and disposal of medical waste. Much of it still ends up in open dumps.

Despite a law that has made dumping illegal, the National Solid Waste Management Commission and local authorities have miserably failed to shut down over 1,000 dumps all over the country.
Our laws disallow and penalize waste burning and incineration to protect us and our children from hazardous emissions and ashes. Why then allow Japan to dump incineration ash and residues in the Philippines?

The Ecowaste Coalition and many other groups pursuing ecological solutions to the waste crisis are wary that JPEPA will only exacerbate toxics in our environment, and undermine efforts to shut down the illegal dumps that continue to contaminate our fragile ecosystems.

By this treaty, our policymakers would have the Philippines virtually welcoming a second Japanese invasion in the form of poisonous waste. This whole agreement should be stamped with the symbol of the skull and crossbones, and rejected by the Philippine Senate and the entire Filipino nation.

The Ecowaste Coalition, a participating group of the “Magkaisa Junk JPEPA” coalition, reiterates its strong objection against the liberalization of trade in toxic wastes under JPEPA.

For more information, please contact us at ecowastecoalition@yahoo.com or (02) 9290376. 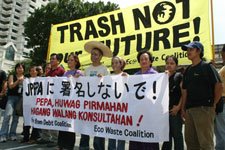 25 October 2006, . The Ecowaste Coalition today expressed its stern objection over the inclusion of trade in hazardous and toxic wastes in the recently signed economic pact between the Philippines and Japan, the world’s second largest economy and the country’s second major trade partner.

Signed on 9 September 2006 by President Gloria-Macapagal Arroyo and then Prime Minister Junichiro Koizumi in during the Asia-Europe Meeting, the Japan-Philippines Economic Partnership Agreement (JPEPA) is described by the Department of Trade and Industry (DTI) as the country’s most important bilateral economic agreement in 50 years.

According to the coalition, JPEPA disregards the country’s major environmental laws such as RA. 9003 (Ecological Solid Waste Management Act of 2000), which prohibits the importation of toxic wastes misrepresented as "recyclable" or "with recyclable content”, and R.A. 6969 (Control of Toxic Substances and Hazardous and Nuclear Wastes Act of 1990), which prohibits the shipment to the of hazardous and nuclear wastes. The dumping of incinerator ash and related residues also contradicts the spirit and intent of R.A. 8749 (Clean Air Act of 1999), which bans the incineration of municipal, biomedical and hazardous wastes.

Some of the JPEPA-tradable wastes are prescribed as hazardous under the implementing rules and regulations of RA 6969, including pathogenic wastes, pharmaceutical wastes, waste oils, pesticides, and chemical compounds containing arsenic, cadmium, chromium, lead, and mercury. Under this law, the entry or even the transit of hazardous wastes and their disposal into Philippine territorial limits is prohibited.

The detailed schedule of tradable wastes also includes waste oils containing cancer-causing PCBs and other extremely toxic compounds. PCB, notes the Coalition, a persistent organic pollutant (POP), is being targeted for phase out in the by 2014. DENR in 2004 issued a Chemical Control Order for the phase out and ban on the importation, sale, transfer and use of PCBs, including PCB wastes.

The Coalition also observed that JPEPA contravenes the goals of the “Basel Convention on the Control of Transboundary Movements of Hazardous Wastes and their Disposal” of which the Philippines is a party. This treaty, which entered into force in 1992, seeks to reduce the international movements of hazardous wastes, and their treatment and disposal as close as possible to where they were generated.

Hazardous waste streams that the Basel Convention seeks to control, which are included in JPEPA, are clinical wastes, pharmaceutical wastes, waste organic solvents, residues from industrial waste operations such as incinerator ash and other byproducts, waste substances containing or contaminated with polychlorinated biphenyls (PCBs), polychlorinated terphenyls (PCTs) and/or polybrominated biphenyls (PBBs), and wastes having as constituents heavy metals, POPs and other toxic chemicals.

“We fear that JPEPA would only legitimize the dumping of hazardous and toxic waste materials in the guise of recycling. Not only are these extremely problematic materials listed in JPEPA, they were even given zero tariffs that will undoubtedly encourage dumping,” said Manny Calonzo of the Ecowaste Coalition.

“The importation of hazardous waste under JPEPA makes an utter mockery of our environmental laws, and goes against the intent of the Basel Convention’s ban on the export of toxic waste from OECD to non-OECD countries even for recycling purposes. We cannot allow our country to be a dustbin for hazardous waste and toxic technologies,” added Calonzo.

Reacting to the probability of the Philippines receiving all sorts of wastes from Japan, Sen. Pia Cayetano, in a statement said,: “I find this situation unacceptable though, because we have not even fully implemented the provisions of RA 9003 despite its passage into law almost six years ago. So how can we take responsibility for the wastes of other countries?"

DENR Undersecretary Demetrio Ignacio, in a statement published in one newspaper, said: “Even if the JPEPA gives 0% tariffs to these imported wastes, we will not let it in… Our environmental laws are still superior to the JPEPA.”

Environmental and other civil society groups fear a possible repeat of the Japanese waste scandal in July 1999 where approximately 2,700 tons of infectious and toxic waste labeled as “waste paper for recycling” arrived in Manila.

Due to public outcry, the contaminated wastes were shipped back to Japan and Japanese businessmen behind the toxic dumping were charged in Japanese court.

For more information, please contact us at ecowastecoalition@yahoo.com or (02) 9290376.

Posted by Rei Panaligan at Thursday, October 26, 2006 No comments: Links to this post

Quezon City. This is the earnest appeal of the Ecowaste Coalition to the general public who are expected to swarm into cemeteries in mammoth numbers for the annual national celebration of All Souls Day.

It is one of our dearly-held traditions to visit the tombs of our departed family members and friends every first of November. Rain or shine, young or old, millions and millions of people pack the cemeteries to join the festive commemoration of All Souls Day, bringing flowers and candles, offering prayers, and reliving fond memories of their dearly departed.

While this is an admirable tradition that unites the Filipino people in loving remembrance of the dead, the celebration is often marred by the wasteful practices and unabashed littering by unruly crowds, right on the hallowed grounds where their loved ones had been laid to rest.
Such thoughtless behavior may be an offshoot of the escalating commercialism in our society, or a lack of awareness on how our habits and actions directly affect our health and environment.

“The cemetery is a sacred place, not a dumpsite. We must take care of it, not defile it, as a sign of respect for those interred there. It is innate in the Filipino culture to be caring towards others and to the environment. Let us show these natural traits in the upcoming celebration of All Souls Day,” urged church volunteer Ochie Tolentino, Steering Committee member of the Ecowaste Coalition.

Bishop Dinualdo Gutierrez, chair of the National Secretariat of Social Action, Justice and Peace (NASSA), said: “We support the Ecowaste Coalition’s timely advocacy to reduce, if not eradicate, our wasteful practices and ensure that our communities are healthy and free from litter and toxics.” NASSA, a partner group of the Ecowaste Coalition, is the social action arm of the influential Catholic Bishops’ Conference of the Philippines (CBCP).

The Ecowaste Coalition, which brings together some 50 groups working on waste and pollution issues, is appealing to the public to contribute their share in making this celebration clean,
environment-friendly, and litter-free.

To administrators of both public and private cemeteries, the Ecowaste Coalition suggests that they designate an adequate number of “recycling stations” inside and outside the cemetery, to facilitate the segregated management of biodegradable and non-biodegradable discards. It will also be helpful to put up highly visible signs or posters enjoining the people NOT to litter, dump, or burn their waste.

The Coalition requests vendors and business owners to stay away from using disposable plastic bags, straws, cups and other single-use plastic items, and to do their best to avoid creating any garbage.

Buyers, on the other hand, are advised to bring reusable bags (like the now trendy “bayong” or “katsa” bags) to hold their purchases, and to refuse plastic bags and wrappers from vendors.

To the general population who will visit the cemetery, the Ecowaste Coalition makes the following calls:

*Choose clean-burning candles that do not emit black fumes or ash, and light only a reasonable number.

* Offer local fresh flowers instead of plastic ones, and avoid wrapping them in plastic. Plastics eventually end up as garbage; they clog our waterways or emit poisons when burned.

* To save money and avoid wastage, desist from bringing or buying excessive amounts of food and beverage. Refrain from using disposable plastic and Styrofoam containers.

* Pack everything you wish to bring to the cemetery in reusable bags and baskets in lieu of plastic bags.

* Throw all discards into the proper disposal bins and be conscious at all times that littering is a NO-NO!

* Should ecological waste management systems be inadequate or lacking in the cemetery, bring home all your discards. Give food leftovers to pet animals or turn into compost with other biodegradable waste, and reuse or recycle the non-biodegradable discards that may have further use.

“We hope the real meaning of our gathering and celebration will not be drowned in noise, chaos and garbage piles. All Souls Day is a sacred occasion to honor the memory of loved ones who had been part of our lives and to offer prayers for their eternal comfort and peace in the Afterlife,” reminded Tolentino.