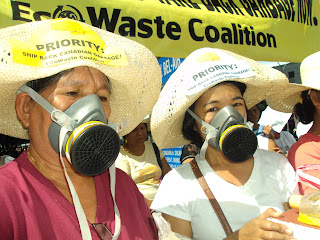 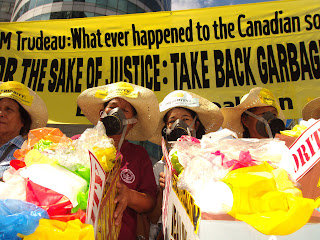 Environmental and labor rights advocates today wrote to Canadian Prime Minister Justin Trudeau and Ambassador Neil Reeder to appeal yet again for the return of the controversy-ridden illegal garbage shipments to its origin.

The letter was sent via e-mail to the Office of the Prime Minister in Ottawa City and the Embassy of Canada in Makati City and signed by officials of Ang Nars Party-List, EcoWaste Coalition, Global Alliance for Incinerator Alternatives, Public Services Labor Independent Confederation, Sentro ng mga Nagkakaisa at Progresibong Manggagawa and private individuals Raphael Lopez and Elaine Lucero.

The above public interest groups and private individuals were “complainants-in-intervention” to Criminal Case No. 14-311191 versus Canadian garbage importers Adelfa Eduardo and Sherjun Saldon for violation of R.A. 6969 or the Toxic Substances and Hazardous Nuclear Wastes Control Act.

The complainants wrote to Canada following a court order issued by the Manila Regional Trial Court (Branch 1) instructing the return to Canada of 50 container vans of residual and hazardous trash that were illegally shipped to the Philippines in the guise of “plastic scraps,”

They asked the Canadian government to support the court order issued by Judge Tita Bughao Alisuag, which an inter-agency committee, meeting last September 5 agreed to pursue as reported by the Bureau of Customs.  The Department of Justice, a member of the committee, will file a motion for the execution of the court order in the case hearing slated for September 30.

“We appeal to Prime Minister Trudeau to respect the court order and extend full cooperation to the Duterte administration to ensure the immediate re-export of their garbage back to Canada,” said Dr.
Leah Paquiz, former Ang Nars Party-List Representative to the 16th Congress.

The complainants urged the Canadian government to publicly withdraw the purported “local solution” announced by Ambassador Reeder in May 2015, wherein “the (Canadian) garbage (will be) treated locally.”

“This ‘local solution’ is utterly distasteful and illegal as ruled by the court and will only deepen the unhealed wounds of environmental injustice,” said Rene Pineda of the EcoWaste Coalition.

In lieu of the so-called “local solution,” they urged Prime Minister Trudeau to fulfill the “Canadian solution” he alluded to in November 2015 on the sidelines of the APEC Summit in response to a question raised by journalist Tina Monzon Palma regarding the garbage dumping scandal.

“The ‘Canadian solution,’ now more than ever, must categorically include the re-importation of the illegal garbage shipments for environmentally-sound disposal in Canada,” they said.

As stated by Judge Alisuag, “our country should not be made a trash bin by (an)other country,” which “will violate equally important environmental laws such as R.A. 9003 or the Ecological Solid Waste Management Act and R.A. 9275 or the Clean Water Act.”

As the aforementioned case is limited to only 50 of the 103 container vans of Canadian rubbish that illegally entered our ports, the complainants asked Trudeau to voluntarily ensure the repatriation of all the illegal garbage shipments.

“To avoid further embarrassment that would come with another legal decision, we suggest that Canada should just take back all its garbage, including those not covered by the said case,” they said.

The complainants also urged Canada to pay the Philippines for all the costs incurred in dealing with your garbage, and to fix the legal loopholes that allowed the unlawful export of Canadian trash to the Philippines, including ratifying the Basel Ban Amendment.

"We want to put this garbage dumping behind us, so our countries can turn over a new leaf in our bilateral relations.  Your government can bring this controversy to a close by doing what is just: take back your garbage and send no more trash overseas,” they told Prime Minister Trudeau and Ambassador Reeder.