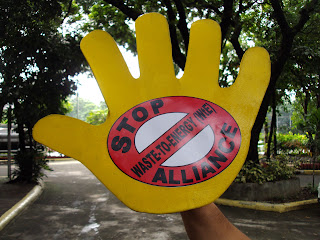 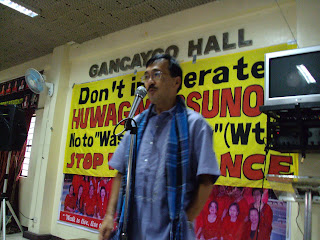 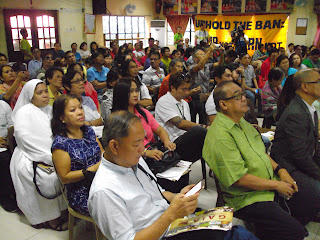 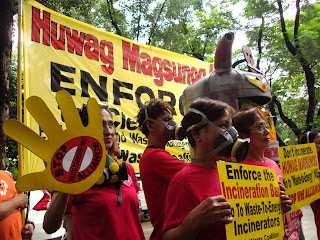 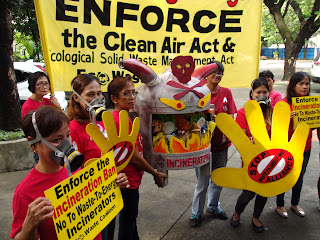 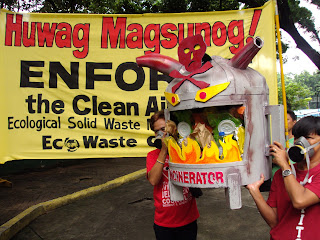 Environmental experts have strongly argued against the adoption of “waste-to-energy” (WtE) technologies that burn municipal solid waste as this will drive up the generation of trash and undermine environmentally sound approaches to managing discards while producing highly toxic pollutants that can harm public health.

At a well-attended forum organized by the Stop WtE Alliance, environmental scientist Dr. Jorge Emmanuel and environmental law specialist Atty. Gloria Estenzo-Ramos joined forces with zero waste and climate justice activists in turning down burn WtE technologies as solutions to the country’s swelling garbage that is projected to reach 40,087 tons per day this year.

“By their very nature, incinerators are technologies that need a constant supply of waste feedstocks.   Moreover, investing in WtE plants commit local government units (LGUs) to these costly technologies for the long term that will require them to make more waste for incinerators to operate profitably,” said Emmanuel who was chief technical advisor of the United Nations Development Program on global healthcare waste projects in 17 countries.

“There is no such thing as ‘clean incineration’ as all incinerators release toxic particulates, toxic gases such as carbon dioxide and carbon monoxide, toxic metals such as lead and mercury and other pollutants in addition to dioxins, including 2,3,7,8-tetrachloro-dibenzo-p-dioxin, the most toxic compound known in science,” he said.

Emmanuel noted that the Philippines does not have the technical in-country capability to carry out regular testing of dioxins from incinerators and to conduct frequent independent spot checks of facilities in order to enforce the current dioxin limit , much less a more stringent dioxin limit to protect public health in the future.

“The use of pollution control devices such as filters and electrostatic precipitators merely move the pollutants from one environmental medium (the air) into another (solid filters or wastewater). The toxic pollutants do not disappear; they are concentrated into other media that have to be treated as hazardous waste,” he pointed out.

Ash from incinerators is toxic, heavily contaminated with dioxins and leachable metals, and under the Guidelines on Best Available Techniques/Best Environmental Practices of the Stockholm Convention on Persistent Organic Pollutants,  ash requires special land disposal as hazardous waste, Emmanuel further said, adding that “these added costs are often not included in economic analyses but they should be.”

For her part, Ramos stated that “no LGU in the country seems to have crafted as yet an air quality action plan as directed by RA 8749 or the Clean Air Act. Only a handful has an approved ten-year solid waste management plan, and it is appalling that some LGUs  are now even contemplating on hosting WtE facilities.  Can LGUs handle the complex WtE process and the tons of hazardous ash to be disposed of a result, when they cannot even comply with what RA 9003 or the Ecological Solid Waste Management Act requires?”

Ramos likewise scored the “Guidelines Governing the Establishment and Operation of WtE Technologies for Municipal Solid Wastes” adopted by the National Solid Waste Management Commission (NSWMC) last June 9 prior to the assumption to office DENR Secretary Gina Lopez on July 1.

“What the NSWMC did was beyond its authority and contrary to R.A. 9003 as WtE encourages the mixing of wastes and undermines the required ecological practices of waste prevention and reduction, segregation at sources and resource recovery for reusing, recycling and composting clearly mandated by said law,” she added.

Speaking on behalf of the Stop WtE Alliance, Aileen Lucero, National Coordinator of the EcoWaste Coalition, said: “We urge our lawmakers, our national government agencies particularly the DENR and NSWMC and our LGUs not to be lured by quick WtE fixes that could further inflate waste volume and  disposal costs, while releasing dioxins, mercury and other toxic pollutants that can damage the public health and the environment.”

“We are playing with fire if we allow WtE facilities to thrive.  What is needed is an honest-to-goodness implementation or RA 9003 nationwide and a change in our old-fashioned mindset to bury or burn our discards,” she added.

a.  Dioxins are toxic at very low levels and are known to cause cancers (specifically chronic lymphocytic leukemia, soft tissue sarcoma, non-Hodgkin’s lymphoma, prostate cancer, as well as cancers of the lungs, larynx and trachea).  They also cause birth defects, alter the reproductive systems of fetuses, impact the IQ of children, suppress the immune system, decrease fertility, cause ovarian dysfunction, and reduce the sizes of male genitalia. They are highly persistent in the environment, so any dioxins produced today will remain for up to 150 years if on top of the soil, more than 500 years if in bodies of water, and up to 1000 years if the dioxins are covered by a few centimeters of soil surface.

b.  The dioxin limits continue to be revised as new data come out. The current Philippine limit is 0.1 ng I-TEQ/Nm3which remains the international standard, but a few years ago the US EPA lowered its dioxin limits even further to 0.0099 to 0.027 ng TEQ/m3.  This suggests that in coming years, the internationally acceptable dioxin limit will go down further as new data compel us to promulgate more stringent limits to protect public health from a pollutant that will remain in our environment for hundreds of years.

3.  Atty. Gloria Estenzo-Ramos was faculty member of the University of Cebu College of Law teaching Environmental Law, among other subjects.  She co-founded the Philippine Earth Justice Center, which is based in Cebu.  At present, she is Vice-President for the Philippines of Oceana, an international organization that is working to protect and restore the oceans.
Email Post