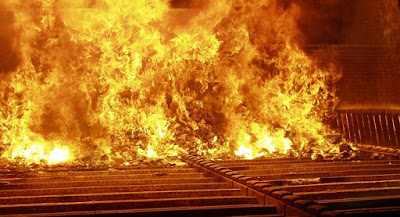 
Various ecology groups exhorted Department of Environment and Natural Resources (DENR) Secretary Gina Lopez not to honor a regulation permitting burn technologies for municipal solid wastes that was adopted on June 9 prior to her formal assumption to office on July 4.

Through a resolution submitted to Lopez during her meeting last September 1 with over 50 environmentalists, the groups urged her as concurrent Chairperson of the National Solid Waste Management Commission “to rescind NSWMC Resolution 669, Series of 2016 and to fully enforce sustainable practices in waste management without incineration as embodied in RA 9003,” or the Ecological Solid Waste Management Act.

The NSWMC regulation adopted last June 9 provides for the “Guidelines Governing the Establishment and Operation of Waste-to-Energy Technologies (WtE) for Municipal Solid Wastes.”

The NGO resolution was adopted at the General Assembly of the Green Convergence for Safe Food, Health Environment and Sustainable Economy on August 30.  It was further endorsed by concerned groups present at the Green Thumb Coalition meeting on August 31.  The EcoWaste Coalition submitted it to Lopez on September 1.

“We thank Sec. Lopez for hearing us out and for considering a review of the controversial WtE guidelines, which, if not repealed, would undermine the country’s efforts to sustainably address our waste problem without incinerating resources that could be reused, recycled or composted instead,” said Aileen Lucero, National Coordinator, EcoWaste Coalition.

“It will be reprehensible to squander massive amounts of public funds to construct, operate and sustain WtE burners when simpler, job-creating and safer solutions exist as specified in RA 9003,” she said.

“As Chairperson of the NSWMC, we urge her to preside over the meeting of the Commission and declare Zero Waste as overall policy and basis for its plan of action,” she added.

According to the groups, “the threat of waste incinerators is more real today than before, especially with the public relations (PR) success of the waste incineration industry to deceptively package WtE as power plants rather than as waste disposal facilities despite the nominal quantity of energy in the form of electricity that is generated from the burning of trash.”

“WtE  is the most expensive scheme for generating electricity that is costlier to build, operate and maintain compared to coal and nuclear power plants and the various renewable energy sources as reported by the US Energy Information Administration,” the groups pointed out.


As WtE uses mixed wastes, “it discourages segregation at source and resource conservation, while furthering disposal mentality to ensure steady feedstock for the perennially hungry waste burning machine,” they noted.


“It will be unconscionable to burn discards as this will deprive poor individuals and families and small businesses, many of whom form part of the under-recognized and under-protected informal waste sector, of useful materials for recycling-based livelihoods,” they said.


“Burn WtE technologies turn the mixed waste feedstock into hazardous bottom and fly ashes containing persistent organic pollutants such as dioxins and furans, toxic metals such as mercury and lead and other chemicals of concern that have no safety thresholds,” the groups warned.

“The government still does not have the capability to monitor these toxic emissions and releases on a continuous basis,” they stated.

The groups further noted that “WtE is incineration in disguise and thus falls under the prohibition of RA 8749 (Clean Air Act), and which also runs counter to the spirit and intent of the country’s pollution prevention and climate protection laws such as RA 9003, RA 9729 (Climate Change Act) and RA 10121 (Disaster Risk Reduction and Management Act) as WtE adds to the carbon and other hazardous emission in the atmosphere.”