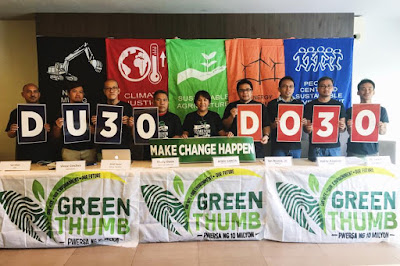 In a press conference held in Quezon City, environmental advocates united once more to remind President Rodrigo Duterte the list of environmental reforms he promised to initiate in the first 100 days of his presidency.

The Green Thumb Coalition, the widest coalition of more than 40 national and local organizations advocating for a progressive environmental agenda, had previously held dialogues with then-presidentiable Rodrigo Duterte, where he clarified positions on several environment, governance and development issues.

“President Duterte has, in our engagements, professed his willingness to work with the environmental sector and the rest of civil society in responding to pressing green, climate and development issues,” said Norie Garcia of the ABS-CBN Lingkod Kapamilya Inc. “While we welcome a lot of developments which has already took place under his administration, a lot can still be done and initiated in the last 30 days of the first hundred days of his presidency.”
Garcia noted that Duterte’s progressive pronouncements range from themes of mining, biodiversity, renewable energy, climate justice, sustainable agriculture, national land use, people-centered sustainable development, waste and even human rights: the nine themes carried by the coalition during its campaign.

Jaybee Garganera of Alyansa Tigil Mina (ATM) welcomed the mining audit led by Department of Environmental and Natural Resources (DENR), which has already resulted in the closing of 10 mines in various areas affected by destructive large-scale mining.

“With Secretary Gina Lopez at the helm of the DENR, significant strides have surely been made in the issue of mining,” Garganera further stated. “However, a new framework of minerals management must be legislated to ensure long-lasting and sustainable progress in the extractive industry,” he added.

Garganera noted that the immediate passage of the AMMB can be realized if President Duterte certifies it as an urgent bill in Congress. Only stricter policies and regulations on the extractive industries will be safeguarded against the massive and continuing poverty and environmental-destruction created by large-scale mining.

The creation of an “Environment Task Force” made up of various departments in the Duterte Cabinet was also welcomed, albeit with considerations. Center for Energy, Ecology and Development (CEED) Convenor stressed the importance of incorporating energy in tackling issues of environment, and the apparent absence of the Department of Energy (DOE) in the task force.

“The ongoing energy review under President Duterte’s administration must consider the environmental and social cost of dirty energy, and yet so far, the DOE has continually argued for the continued reliance on coal for the country’s power mix,” said Arances. “We must collectively recognize that allowing new coal mining and coal fired-power plants in the country will tie the Filipino people into a technology which is already being phased out internationally,” he added.

Arances cited the recent Oxford study saying that increasingly, coal-based technologies are deteriorating into liabilities rather than assets because of the risks they pose to the environment and the economy, and given that renewable energy is being pursued by more and more countries. He called on the President-elect to lead in the transition towards increasing the share of renewable energy in the power mix, which according to studies has decreased over the span of 8 years, even with laws like the Renewable Energy Act of 2008 in place.

“We welcome the affirmation of the presumptive President regarding the recent resolution from the Climate Change Commission to put under review new and existing coal plants, we call on his administration to implement a moratorium on the approval of new coal projects while the review process is being implemented,” said Philippine Movement for Climate Justice (PMCJ) National Coordinator Ian Rivera. “This is in line with his agenda and commitment to stream-in renewable energy,” he added.

Thony Dizon of the Ecowaste Coalition lauded the move by the Duterte administration to begin re-exporting illegal Canadian garbage shipped to the Philippines. “We welcome this development and want to ensure that all 103 containers of Canadian garbage will be re-exported, not just the 50 shipping containers specified by the Manila Regional Trial Court,” Dizon said.

Meanwhile, Dizon cautioned the Government into fast-tracking Waste-to-Energy incineration projects which goes against the incineration ban as contained in the Clean Air Act and Ecological Solid Waste Management Act. “The present ‘Guidelines Governing the Establishment and Operation of Wate-to-Energy Technologies for Municipal Solid Waste’ could open the floodgates for costly and polluting incinerators to burn wastes, which could be reused, recycled and composted instead of being burned,” said Dizon.

“While we recognize that there are many positive steps initiated by the Duterte administration, we cannot ignore the issue of human rights which has been a prevalent theme during the President’s first one hundred days,” Pedrosa said.

Pedrosa noted that issues regarding charter change, federalism and other significant changes must be approached with significant consideration of the widespread poverty and the people’s need for sustainable and people-centered policies. “At present, President Digong’s plan for development still resembles his predecessor’s development plan,” Pedrosa said.

Pedrosa encouraged the Head of State to review and revise his development plan to ensure that human rights, dignity and well-being will not suffer in favour of profit and a business-as-usual track of development. The Duterte Government is at present in the process of revisiting the country’s Medium Term Philippine Development Plan.

In addition to these action points derived from Duterte’s favourable responses to issues of the environment, stricter policies on waste, land use and biodiversity has also been supported by the Duterte administration, as well as commitments on agriculture, fisheries and agrarian reform in favour of marginalized sectors in society.