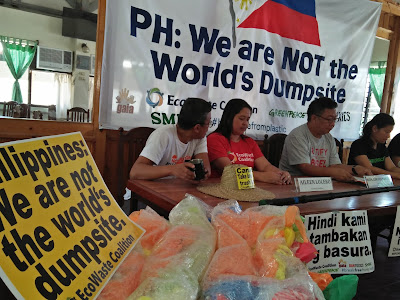 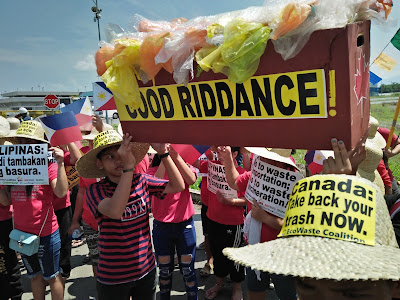 As the Philippines bid goodbye to the Canadian waste, six years after it was discovered in Philippine ports, environmental groups are calling on the Philippine government to ban all waste imports in the Philippines and ratify the Basel Ban Amendment. This follows the discovery of several other waste shipments to the Philippines from South Korea in 2018 and Australia and Hong Kong, which were divulged last week.

From 2013 to 2014, 103 shipping containers from Canada were intercepted in the Port of Manila containing mixed wastes,  including non-recyclable plastic, waste paper, household waste, electronic wastes, and used adult diapers. These materials are classified as hazardous, based on the Toxic Substances and Hazardous and Nuclear Waste and Control Act of 1990 (Republic Act 6969). Moreover, the importation of the shipment violates the Basel Convention, as the contents of the cargo vans were misdeclared as ‘recyclable’.

While the return of Canada’s waste is a positive development, only a little more than half (69 containers) of the original waste is being shipped back; 26 containers were already landfilled in the Philippines at the time when Canada disowned responsibility for the shipment; the other eight containers were also disposed of locally.

Aside from the controversial Canadian waste, shipments containing garbage from South Korea were discovered in October 2018. After campaigns from environmental groups in both the Philippines and South Korea, the Philippine government and its South Korean counterparts agreed to ship back part of the waste shipment in January 2019. The remaining 5,176.9 metric tonnes of waste are still in Misamis Oriental, awaiting repatriation.

In May 2019, the entry of wastes coming from Australia and Hong Kong in Mindanao Container Terminal became public.

Ever since China closed its doors to waste importation in January 2018, Southeast Asian countries have been the destination of waste exports from developed countries. A report from Greenpeace revealed that the majority of ‘mixed recyclable plastics’ previously destined to China are being redirected to countries in the region with weak environmental regulations. [1]

Local NGO groups, including Ecowaste Coalition, Greenpeace Philippines, Global Alliance for Incinerator Alternatives, BAN Toxics, and the global Break Free from Plastic movement, reiterated the call for the Philippine government to ratify the Basel Ban Amendment, which prohibits the import of all waste for any reason, including “recycling.”

The groups also launched an online petition [2] calling on President Rodrigo Duterte to declare a ban on the entry of wastes to the Philippines and to ratify the Basel Ban Amendment. Ecowaste Coalition called on all Filipinos to ‘raise the flag’ on social media to make a strong and collective stance against the entry of illegal waste shipment in the country. [3]

Notes to the editor:

[2] Ban entry of foreign waste to the Philippines. https://act.gp/banforeignwaste