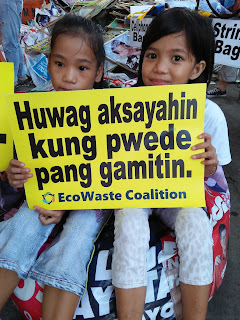 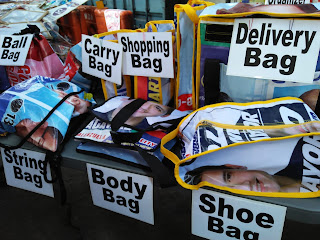 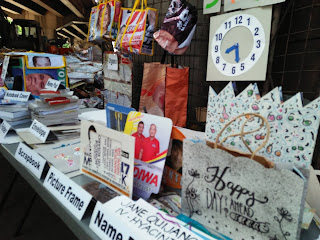 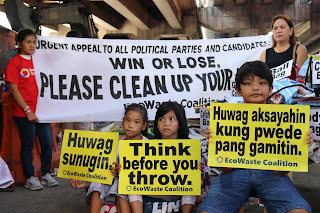 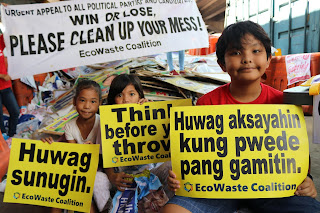 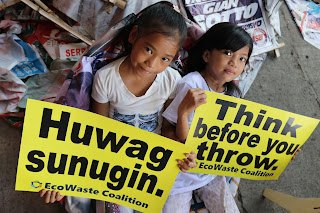 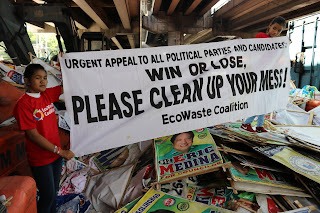 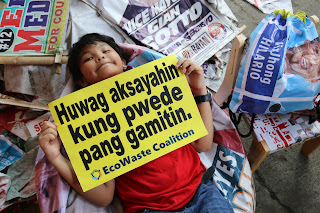 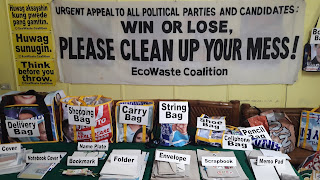 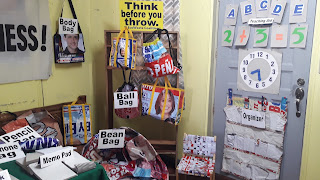 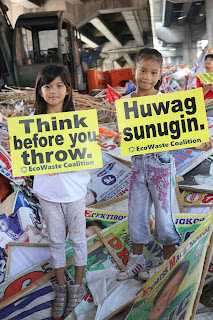 THINK BEFORE YOU THROW:  To reduce the volume of post-election discards requiring disposal, the EcoWaste Coalition encourages candidates, parties and the general public to find innovative uses for used campaign materials such as leaflets, posters and sample ballots instead of burning or dumping them, which can only contribute to environmental pollution.

Now that the ballots have been cast, a waste and pollution watch urged those who ran for elective posts as well as the general public to conduct post-election cleanup and upcycling activities.


"Regardless of the outcome of your election bid, we appeal to all candidates and parties to take down your campaign materials without delay.  Kabit, sabit o dikit mo, tanggal mo,” said Aileen Lucero, National Coordination.

“Sort the dismantled campaign materials and upcycle them as much as possible,” she suggested.

“Upcycling, or the creative reuse of discards, is a practical way of saving resources from being burned or sent to the dumps and landfills for disposal,” she added.

In an attempt to discourage indiscriminate disposal and encourage upcycling, the EcoWaste Coalition today showed the many functional uses of spent election propaganda articles such as leaflets, posters and sample ballots.

At an event held at the MMDA temporary holding area for dismantled campaign materials under the Santolan-EDSA flyover, bagmaker Lolita Calusayan, "Junk Not" advocate Wilhemina Garcia, informal recyclers from Capulong, Manila and the EcoWaste staff displayed some of the easy to make upcycled items.

Polyethylene plastic posters were reused as covering for books and notebooks.

The group noted that tarpaulins can also be reused as upholstery material, as a protection against rain or sunlight for vehicles, and as awnings for homes and stores.

The group further reminded that plastic PVC tarpaulins should only be reused for non-food and non-child applications.

As these tarps may contain toxic additives such as cadmium and lead, which may leach and contaminate the food or expose children to chemical hazards, the EcoWaste Coalition suggested that tarps should only be reused for non-food and non-child uses.

To prevent and reduce trash in future elections, the EcoWaste Coalition urged the Commission on Elections (COMELEC) to upgrade existing rules to ensure the judicious use of resources and eliminate the use of materials that are toxic and are difficult to reuse or recycle.

"There is also a need to responsibilize candidates and parties in the mandatory removal and environmentally sound management of campaign materials right after election," Lucero said.

"COMELEC and deputized agencies have to strictly enforce the ban on the distribution of sample ballots on polling day, which only contributes to the trashing of polling stations," she said

"Like the reported incidents of vote buying, littering has again tainted the democratic exercise of choosing our political leaders.  Next time, our citizens should come prepared with their own voting kodigo to render sample ballots irrelevant and avoid turning polling places into dumpsites," she said.