DENR, EMB Urged to Ban Waste Importation Following President Duterte’s Marching Orders (“Send a clear message to the global community that the Philippines is not a dumping ground for wastes and toxics from overseas”) 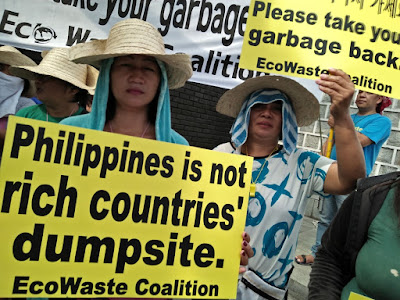 The waste and pollution watch group EcoWaste Coalition exhorted the Department of Environment and Natural Resources (DENR) and the Environmental Management Bureau (EMB) to take President Rodrigo Duterte’s pronouncement against waste importation to heart and bring the Philippines in alliance with other countries that have taken action to ban foreign waste imports.

As announced by Presidential Spokesperson Salvador Panelo during a news conference last Tuesday:  "The president is firm that we are not 'garbage collectors', thus he ordered that the Philippines will no longer accept any waste from any country."

Duterte’s marching orders drew cheers from the EcoWaste Coalition who had earlier written on March 12, 2019 to the DENR and EMB proposing immediate prohibition against plastic and electronic waste importation, as well as the ratification of the Basel Ban Amendment, to protect the country from becoming a dumping ground for the world’s garbage.

“After the departure of the Canadian garbage next week, we expect DENR Secretary Roy Cimatu and EMB Director Metodio Turbella to formalize President Duterte’s verbal instruction into a strong regulatory policy that will proactively prevent the entry of hazardous wastes and other wastes into our ports,” she said.

“To make this happen, DENR has to revise Administrative Order 2013-22 to correct weak import controls for waste items, and the Duterte government has to ratify the Basel Ban Amendment to be concurred by the Senate,” she said.

“By doing so, we send a clear message to the global community, including waste traders and traffickers, that the Philippines is not a dumping ground for wastes and toxics from overseas,” she pointed out.

The EcoWaste Coalition noted that some senatorial candidates for the May 13 midterm elections have also expressed their support for the ratification of the Basel Ban Amendment by the Philippine government.

Re-electionist senators Bam Aquino, Nancy Binay and Grace Poe vowed to push for the ratification of the Basel Ban Amendment based on the responses they provided to the Green Electoral Initiative (GEI) survey of the EcoWaste Coalition.

According to EMB’s reply dated April 29 to the EcoWaste Coalition’s letter of March 12, “EMB is currently reviewing and revising DAO 2013-22 to update the present requirements as well as to address emerging issues or concerns.”

With respect to Basel Ban Amendment, EMB said it has commissioned a cost-benefit study for the Philippine ratification of the said measure.

“Initial results showed the overall beneficial impact of the Ban Amendment in the Philippines where the long-term financial, environmental and social benefits outweighed the short-term costs,” the EMB said.