Environmental Activists Step Up Protest over Unreturned Garbage from Canada 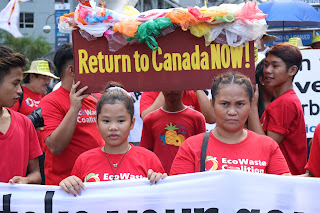 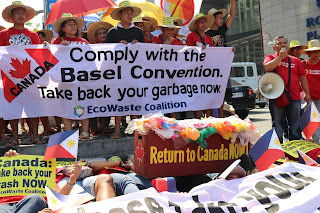 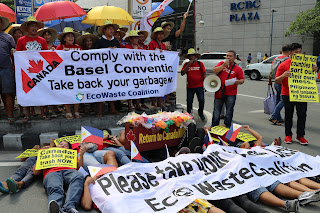 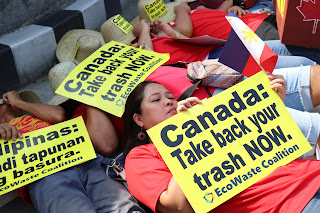 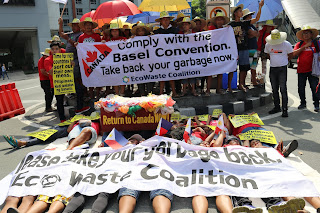 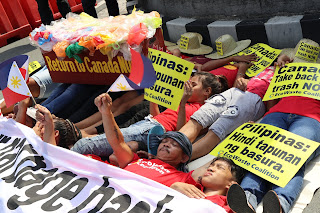 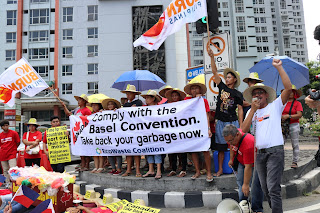 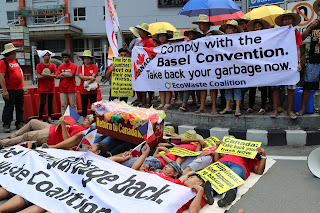 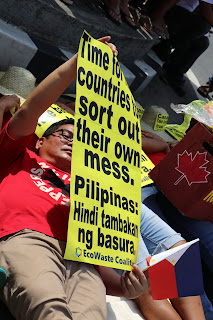 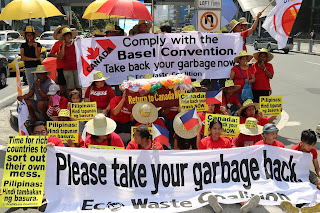 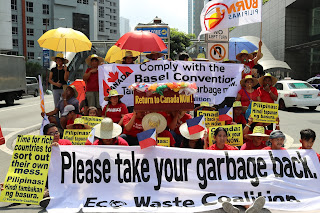 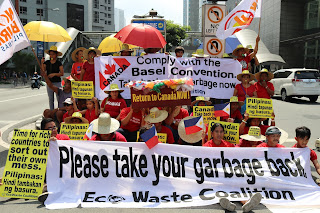 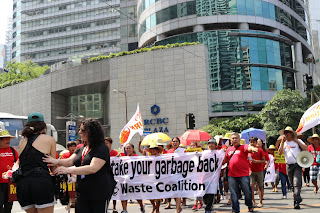 Now is the time to ship back to Canada their rotting garbage in the Philippines, no ifs or buts about it.


Environmental justice activists belonging to the waste and pollution watch group EcoWaste Coalition affirmed this message as they stage a die-in protest outside the Canadian Embassy in Makati City to push the government of Prime Minister Justin Trudeau to speed up the removal of their garbage out of Manila and Subic Ports.

Dozens of activists laid down on the traffic island along Buendia Avenue a week after the Canadian government failed to meet Duterte government's May 15 ultimatum for the re-export of 69 container vans of garbage to their origin in the port of Vancouver.

Some of the protesters held up a banner reading “Canada, comply with the Basel Convention, take back your garbage now.”

The latest protest action at the Canadian foreign mission came on the heels of the unprecedented decision by the Philippine government to maintain diminished diplomatic presence in Canada over the garbage dispute that saw Ambassador Petronila Garcia and her consuls general being recalled.

“We are here again to ask the Canadian government to take back their garbage now to avert further escalation of conflict between Manila and Ottawa due to the unreturned garbage.  To restore the two countries’ good bilateral relations, Canada has to act fast on its promise to retake the illegal waste shipments,” said Aileen Lucero, National Coordinator, EcoWaste Coalition.

“We do not want to see our labor attachés in Toronto and Vancouver being recalled as well because of Canada’s failure to re-import their garbage,” she added.

Last Saturday, Labor Secretary Silvestre Bello III said he was mulling over the possibility of also withdrawing officials in charge of the Philippine Overseas Labor Office (POLO) in Canada because of the unresolved dumping issue.

“If Canada truly values its deep and longstanding relationship with the Philippines, they should have made immediate and high priority arrangements to take their garbage home in keeping with their obligations under the Basel Convention,” Lucero asserted.

“For over five years, Canada has failed to assume responsibility for the illegally traded wastes and unfairly put the burden of dealing with the Canadian generated wastes on the Philippine government,” she pointed out.

Article 9 of the Basel Convention imposes an obligation on the State of export, in this case Canada, to ensure the return of wastes where the export of the wastes is deemed to constitute “illegal traffic”.

To prevent the recurrence of illegal waste trafficking, the EcoWaste Coalition called on both the governments of Canada and the Philippines to rapidly ratify the Basel Ban Amendment.

This amendment to the Basel Convention, which has yet to enter into force, prohibits the export of hazardous wastes from developed to developing countries for any reason, including recycling.

The group also reiterated its call on the Department of Environment and Natural Resources to revise current regulations to stop waste imports into the Philippines.

To recall, 103 container vans falsely declared to contain recyclable homogenous plastic scraps arrived In 2013 and 2014 at the port of Manila from the port of Vancouver.  The shipments were sent by Chronic Inc. based in Ontario and were consigned to Chronic Plastics and Live Green Enterprises in the Philippines.

Inspections conducted by the authorities found plastics and household residuals, used adult diapers, and electronic discards in the shipments.

Thirty-four of the 103 containers have been disposed of locally, and only 69 containers are to be shipped back to Canada.