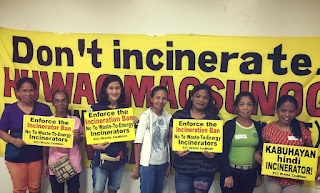 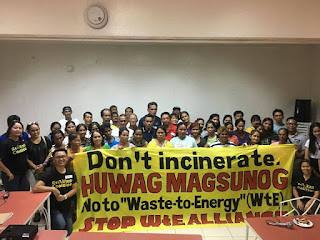 National and local authorities should acknowledge and tap the immense potentials of waste pickers and the rest of the thriving informal waste sector (IWS) in reducing the country’s garbage production estimated at 40,087 tons per day.

At a forum organized yesterday by zero waste advocacy group EcoWaste Coalition, the 60 informal recyclers in attendance drew attention to the sad plight of their often ignored sector, including the occupational health and safety hazards faced daily by the IWS, the lack of economic and social security, and the inadequate government support.

The participants from Caloocan, Malabon, Manila, Navotas, Quezon and Valenzuela Cities and Meycauayan and Obando, Bulacan hail from the different sub-groupings of the IWS such as waste pickers in dumpsites and garbage transfer stations, e-waste dismantlers, door-to-door waste collectors, and itinerant waste pickers.

“We created this opportunity for the IWS representatives from various communities to meet and find strength in each other’s experiences and aspirations,” said Daniel Alejandre, Zero Waste Campaigner, EcoWaste Coalition.

At the forum, the IWS representatives eagerly affirmed their common goal to have decent, safe and secure jobs and livelihoods, and access to basic social services, including low-cost housing for the poor.

They emphasized the importance of the IWS, who are waste experts in their own right, in the development and implementation of solid waste management strategies and plans from barangay to the national level.

Engr. Eligio Ildenfonso, Executive Director of the NSWMC, told the participants:  “Huwag maliitin ang papel ninyo sa lipunan. May importanteng serbisyo kayo na dapat kilalanin ng mga pamahalaang lokal para mabawasan ang basurang itinatapon sa landfill na dapt ay latak lamang.” ("Do not underestimate your role in the society. You render an important service that local governments should recognize to reduce the volume of trash to be disposed of in landfills, which should be limited to residuals.)

The forum also discussed the imminent threat to the IWS from waste disposal technologies that burn discards, including recyclables, in the guise of generating electricity.

“Our goal is to prevent recyclables from being wasted to feed the so-called waste-to-energy (WtE) incineration plants, undermining recycling efforts, and jeopardizing the economic livelihood of waste pickers and their families,” stressed Lora Abengoza, WtE Campaigner, EcoWaste Coalition.

The forum also sought to inform the IWS about the opportunities under Republic Act 10771, or the Green Jobs Act.

As discussed by Brenalyn Peji, Director of the Institute for Labor Studies of the Department of Labor and Employment (DOLE), R.A. 10771 seeks to promote and incentivize green jobs such as jobs that help to protect the ecosystems and biodiversity, reduce energy, materials and water consumption, decarbonize the economy, and minimize or altogether avoid generation of all forms of waste and pollution.

Aside from DOLE and the NSWMC, the forum was also attended by the Presidential Commission for the Urban Poor (PCUP).