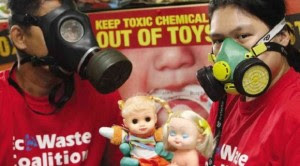 Photo by Marianne Bermudez, PDI
With the ber months fast approaching, two organizations today reiterated their common appeal to the Department of Trade and Industry (DTI) to promulgate the long-delayed Implementing Rules and Regulations (IRR) of Republic Act 10620, or the Toy and Game Safety Labeling Act of 2013.

“The apparent delay in the issuance of the IRR, which is deeply lamentable, does not serve the law’s objective of promoting children’s right to safe toys, particularly their right to adequate and truthful information to facilitate sound choice,” said Atty. Victorio Dimagiba, President,  Laban Konsyumer.

“The DTI should release the IRR as the actual enforcement of R.A. 10620 depends on it.  The honest-to-goodness implementation of the mandatory labeling requirements, we believe, will help in curbing the unrestrained trade of unsafe toys such as those that are laced with dangerous chemicals,” stated Thony Dizon, Coordinator of the EcoWaste Coalition’s Project Protect.

A study on toys sold in the local market conducted in July 2011 by the EcoWaste Coalition and IPEN (a global NGO network promoting safe chemicals policies and practices) found 29 percent of 200 toy samples to be laden with harmful substances such arsenic, cadmium, chromium, lead and mercury above levels of concern.   None of the analyzed toys had labeling information about their chemical composition, and many had no cautionary statements.

Subsequent studies revealed the prevalence of more unsafe toys in the market, which can pose chemical, choking, flammability, laceration, strangulation and other health and safety hazards, especially among young children.

Legislators took notice of the problem and filed pertinent bills, including Senate Bill 3367 and House Bill 6529 which were consolidated into R.A. 10620, to protect children from unsafe toys through mandatory safety labeling requirements.

R.A. 10620 requires compulsory labeling for all toys and games in accordance with the appropriate provisions on safety labeling and manufacturer’s markings found in the Philippine National Standards (PNS) for the safety of toys.

It further requires cautionary statement to be displayed in its entirety on the principal display panel of the product’s package and on any descriptive material which accompanies the product.

R.A. 10620 provides for the removal from the market of toys and games that do not adhere to the labeling and packaging requirements.  Such non-compliant toys and games shall be considered misbranded or banned hazardous substance, and shall be withdrawn from the market at the expense of the manufacturer, importer, wholesaler or distributor.

For the guidance and protection of consumers, requires the DTI to regularly publish every six months, the list of all manufacturers, importers, distributors and retailers who failed to comply with the requirements of R.A. 10620.

The law also requires the DOH to publish every six months, the list of all misbranded or banned hazardous substances the sale, offer for sale and distribution of which shall not be allowed under R.A. 10620.