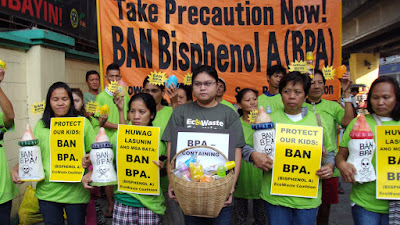 A public interest group promoting chemical safety and zero waste for the nth time urged the country’s health authorities to ban the substance Bisphenol A, or BPA, in feeding bottles and sippy cups.

The EcoWaste Coalition reiterated its appeal for either the Department of Health (DOH) or the Food and Drug Administration (FDA) to prohibit the manufacture, importation, advertisement and sale of polycarbonate plastic feeding bottles and sippy cups containing BPA, a known endocrine disrupting chemical.

A draft DOH Administrative Order on BPA has been pending since 2013, while a draft FDA Circular has been recently prepared.

“We support the immediate issuance of a government policy that will finally ban BPA-laden baby feeding bottles and sippy cups and eliminate the risks that such childcare products pose,” said Thony Dizon, Coordinator of the EcoWaste Coalition’s Project Protect.

“The issuance of such policy will add to the list of progressive health measures adopted by the current administration, including President Rodrigo Duterte’s Executive Orders banning smoking in public places and limiting the use of firecrackers and other pyrotechnic devices,” he added.

“We hope to see the signed policy soon for the sake of our babies who are most vulnerable to chemical exposures,” he said, stressing that “it is our shared task to safeguard our babies from harmful substances during the most sensitive phases of their development.”

The requested policy, if adopted, will make the Philippines the latest country to ban BPA in childcare articles like feeding bottles and sippy cups, the EcoWaste Coalition said.

Last June 2017, the Member State Committee of the European Chemicals Agency (ECHA) unanimously agreed on the identification of BPA “as a substance of very high concern  because of its endocrine disrupting properties which cause probable serious effects to human health.” ECHA had earlier said that BPA is “toxic for reproduction.”

As the World Breastfeeding Week is celebrated on August 1-7, the EcoWaste Coalition also reaffirmed its commitment to “defend the right of every baby to mother’s milk, the first complete and Zero Waste food, from the direct assault of deceptive advertising and promotion of artificial breastfeeding and chemical pollution.”