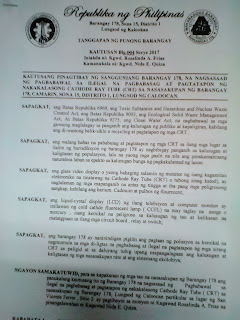 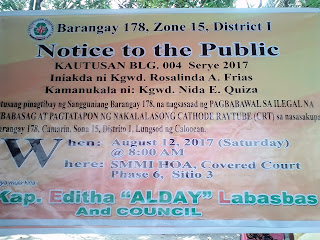 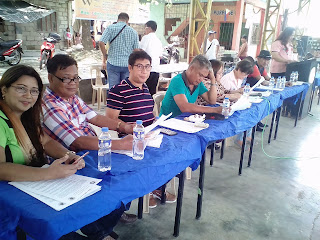 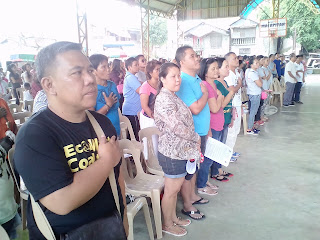 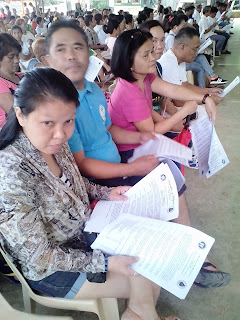 Residents of Barangay 178 in Camarin, Caloocan City threw their unanimous support behind a timely health and environmental measure banning the unlawful breaking and dumping of toxic cathode ray tubes (CRTs).

CRTs, the glass video display component of television and computer sets, contain dangerous levels of lead and other hazardous substances, including barium, cadmium and fluorescent powders that must be handled and disposed of in an environmentally-sound manner.

At a well-attended public hearing held on August 12 and presided over by Barangay Chairperson Editha Labasbas, close to 500 residents voted overwhelmingly for the adoption of Barangay Ordinance No. 004, Series of 2017, which prohibits and penalizes the illegal breaking and disposal of CRTs in their area of jurisdiction.

“We laud Barangay 178 for taking a decisive move to curb toxic threats in their community from the reckless destruction and disposal of CRTs,” said Thony Dizon, Coordinator of the EcoWaste Coalition’s Project Protect.

The ordinance authored by Councilor Rosalinda Frias and co-authored by Councilor Nida Quiza was in response to a report filed by the EcoWaste Coalition alerting the barangay and city authorities about the danger posed by discarded CRTs to the residents’ health and their environment.

Last March 5, 2017, the EcoWaste Coalition found piles of broken CRT glasses in several spots by the creekside and at the creek itself, which the group immediately reported to Labasbas and Caloocan City Mayor Oscar Malapitan.

“The action taken by Barangay 178 should encourage other communities to tackle the menace of e-waste and to support the government-led drive to safely manage CRTs,” Dizon added.

Dizon was referring to the five-year project of the Department of Environment and Natural Resources - Environmental Management Bureau, in cooperation with the United Nations Industrial Development Organization and other partners, towards the safe management of polychlorinated biphenyls (PCBs) for electric cooperatives, and polybrominated diphenyl ethers (PBDEs) in e-wastes.

The ordinance also noted that "the liquid-crystal display of some television and computer monitors are illuminated by cold cathode fluorescent lamps containing mercury, a chemical that is hazardous to human health and the environment."

"Barangay 178 is committed to preventing chemical pollution arising from the unsafe breaking and unlawful dumping of broken CRTs in the surroundings and waterways to safeguard the health and safety of its constituents and the ecosystems," the ordinance emphasized.

Violators of the ordinance shall pay a fine P300 and render three-hour community service for the first offense.

For the second offense, a fine of P500 shall be imposed plus five-hour community service.

For the third offense, violators shall be fined P1,000 and be required to do eight-hour community service.

Barangay Ordinance 004-2017 shall take effect 15 days after submission to the Caloocan City Council for review and approval.