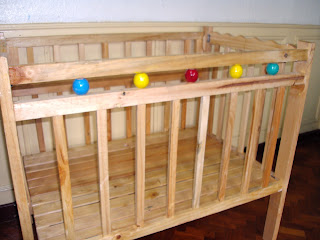 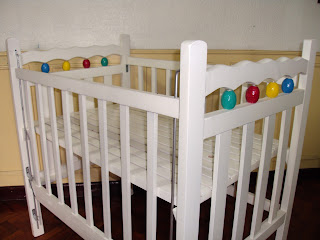 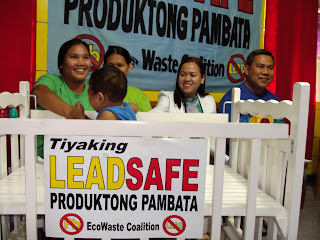 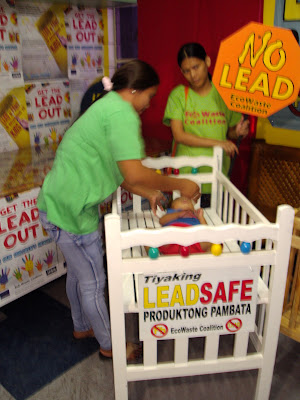 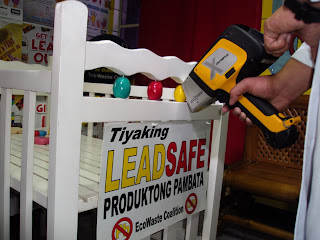 To mark the National Children’s Month, the EcoWaste Coalition held a press briefing today to draw the attention of government regulators and parents on lead-containing baby furniture and the urgent need to prevent infant exposure to toxic lead.

“Our discovery of lead in locally-made cribs prompted us to hold this event in order to inform the public and to push the government to act, on the basis of the precautionary principle, to protect helpless babies from being exposed to toxic lead in paint chip and dust,” said Thony Dizon, Coordinator of the EcoWaste Coalition’s Project Protect.

The yellow coated balls of the crib from Maypajo, costing P2,000, had lead content reaching 7 ,871 parts per million (ppm), and the one from Sta. Cruz, costing P1,000, had 6,938 ppm, exceeding the target 90 ppm maximum allowable limit for lead in paint under the DENR Chemical Control Order for Lead and Lead Compounds.

Dizon clarified that not all of the painted balls on the cribs had lead.  Lead was not detected on the blue, red and turquoise colored balls, as well as in the white-coated frame, providing evidence that lead-safe paints are available for use in children’s furniture.

“While this is not the first time that we detected lead on children’s furniture, we were deeply shocked to find lead on infant beds that may be exposing babies to this health-damaging substance at an extremely sensitive stage of their development,” he said.

Dizon recalled that in 2013, seven kiddie chairs sent by the EcoWaste Coalition to a private laboratory were found to contain lead up to 20,680 ppm.

The EcoWaste Coalition is concerned that the lead painted surfaces will crack or peel over time and get ingested by babies.

“Babies may swallow the leaded paint chips or leaded dust through their usual hand to mouth behaviour.  They may even bite on the lead-painted balls, especially during the teething phase, thus increasing the risk of exposure,” Dizon said.

According to WHO, “the  human  brain  has  little  capacity  for  repair,  these effects  are  untreatable  and  irreversible.  They cause diminution in brain function and reduction in achievement that last throughout life.”

The WHO has warned that “children are particularly vulnerable to the neurotoxic effects of lead, and even relatively low levels of exposure can cause serious and in some cases irreversible neurological damage,” stressing “there is no known level of lead exposure that is considered safe.”

“While the phase-out period for lead-containing decorative paints will take effect in December 2016, we urge paint consumers, including furniture makers, to choose lead safe paints to curb childhood lead poisoning,” he said, adding that “a range of paints without added lead are available in hardware and paint stores.”

The EcoWaste Coalition specifically requested DOH Secretary Janette Garin to initiate a product recall order to prevent the further distribution and sale of the lead-tainted cribs as indicated in the letter that the group sent to the agency on November 25.

The group also urged DENR Secretary Ramon J.P. Paje to consider expanding the list of prohibited uses of lead under the Chemical Control Order for Lead and Lead Compounds to include the prohibition on the use of lead in the production of children’s furniture and other items that are likely to cause childhood lead exposure.

At present, the said Chemical Control Order bans the use of lead in the production of school supplies and toys, among other things.
-end-

Sharon Smith said…
I ordered the baby uniform from Amazon after seeing them in person at a friend's home. Then we picked out a new much larger dresser at IKEA (Hemnes) and a white framed mirror.
Sunday, June 05, 2016

Anonymous said…
This article gives the light in which we can observe the reality. This is very nice one and gives indepth information. Thanks for this nice article. κουνια μωρου