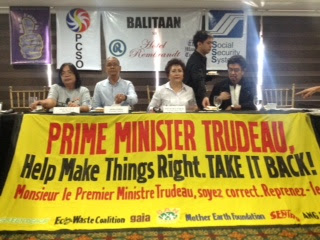 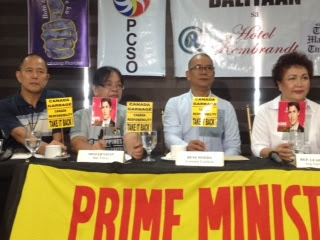 Visiting Prime Minister Justin Trudeau of Canada can turn a long-stinking garbage dumping scandal into an opportunity to correct a brazen case of environmental injustice by doing what is right.

At a press conference held prior to the arrival of the newly-installed leader of Canada for the Asia Pacific Economic Cooperation (APEC) Summit, environmental, health and labor leaders noted the "winds of change" brought about by Trudeau's rise to power as they  expressed optimism that he will determinedly act to resolve the garbage controversy spanning over two years.

"We hope that the winds of change blowing across Canada will lead to Trudeau's Cabinet wasting no time to re-import the illegally exported garbage to the Philippines and bring this prolonged controversy to a close.  Such action will show that his government does not and will not condone illegal garbage trade that is treating low and middle-income countries as dumps," said Rene Pineda, Vice-President of the EcoWaste Coalition, an environmental watchdog group for chemical safety and zero waste.

For her part, Ang NARS Party List Rep. Leah Paquiz reiterated that lawmakers from both chambers of the Congress believe that the Philippine government must return the illegal garbage imports and that the Canadian government must take them back pursuant to the Basel Convention on the Control of Transboundary Movements of Hazardous Wastes and Their Disposal to which Canada and the Philippines are state parties.

"In fact, the Committee on Ecology of the House of Representatives had written to its counterpart in the Canadian Parliament to express its 'united position' that the botched 50 containers of garbage shipments and those exported thereafter should be re-imported by Canada in line with the Basel Convention.  We hope that Canadian lawmakers will cross party lines and unanimously back our position," she added.  "Let us all exercise ethical trade as we raise the gear to free trade," the legislator emphasized.

Shalimar Vitan, Chief operations officer of Ban Toxics, pointed out that the APEC summit in Manila is a fitting occasion to re-think transhipment policies on waste and an opportunity for PM Trudeau to immediately resolve the Canadian garbage issue.

"With PM Trudeau at the helm, we expect the Canadian government to turn around the previous stonewalling by the Harper government, to make things right and just, and take back the waste that Canada exported to the Philippines," said Vitan.

Pineda, Paquiz and Vitan further expressed their hope that the Canadian garbage issue will be duly taken up and resolved during the bilateral meeting between Prime Minister Trudeau and President Benigno S. Aquino III.

From June to September 2013, over 50 container vans of mixed garbage from Canada, consigned to Chronic Plastics, entered the port of Manila and subsequently intercepted by customs authorities.

After languishing in the port for months, 26 of the 50 garbage-filled containers were illegally disposed of at the Metro Clark landfill in Capas, Tarlac between June 26 to July 8, 2015 until revealed and stopped by incensed provincial government leaders and their constituents.