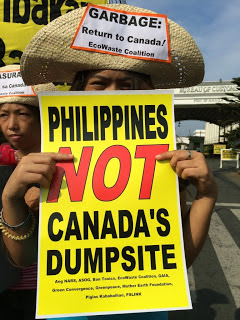 The EcoWaste Coalition, a watchdog group for chemical safety and zero waste, urged Prime Minister Justin Trudeau to order the immediate return to Canada of their botched illegal trash shipments while his government devise a “Canadian solution” to solve the festering dumping scandal.

The group insisted that the illegal garbage imports have nowhere to go but Canada and that the development of a “Canadian solution” should not be used as an excuse to justify the extended stay of the trash consignments in the country for temporary storage or permanent disposal.

At a press conference held yesterday, Trudeau stated that a “Canadian solution” is being crafted to plug the loopholes that allowed the export of Canadian trash to the Philippines, but made no commitment on taking back their garbage as firmly demanded by concerned groups, legislators and citizens.

“I have obviously been made aware of the situation and I’ve also been told that there is a Canadian solution in the process of being developed. But, at the same time, I know that this has exposed a problem that needs fixing within our own legislation that we’re going to lean into and make sure happens,” Trudeau said.

In reaction, Rene Pineda, Vice-President of the EcoWaste Coalition, said: “Prime Minister Trudeau must have been made aware that the Basel Convention has become part of the laws of countries that acceded to it through their ratification.  And that their enabling law cannot be inferior than the Convention.”

Pineda was referring to a legally-binding treaty called the “Basel Convention on the Control of Transboundary Movements of Hazardous Wastes and their Disposal,” which includes Canada and the Philippines as state parties, that aims to protect human health and the environment against the adverse effects of hazardous wastes and other wastes.

“And when he admits the loopholes in Canada’s enabling law, then that’s an indictment of their violation of the Basel Convention.  As no amount of amendment to Canada’s law would extricate them from culpability and international shame, Trudeau should have seized the golden opportunity to display real statemanhood required of every leader and commit to re-importing Canada’s garbage.  What a waste, what a shame!” he said.

To effectively plug the loopholes that have caused trade in hazardous wastes to flourish, Pineda challenged the governments of both Canada and the Philippines to ratify the “Basel Ban Amendment.”

The “Basel Ban Amendment,” introduced in 1995, prohibits highly industrialized countries from exporting hazardous wastes to developing countries “for final disposal, reuse, recycling and recovery.” This amendment to the Basel Convention has yet to enter into force.

The EcoWaste Coalition had earlier commented that “unless the Philippine government ratifies the ‘Basel Ban Amendment’ and reflects its intent in our national laws, the country will continue to be a recipient of hazardous garbage from overseas, made possible under the guise of recycling or recovery.“

Senator Miriam Defensor Santiago in September 2014 filed a resolution calling for “an inquiry, in aid of legislation, on ways to decisively prevent illegal waste dumping from abroad, including the ratification of the ‘Basel Convention Ban Amendment’ and other legal measures to protect the country from becoming a global dump for hazardous wastes.”

From June 2013 to January 2014, a total of 103 container vans of mixed garbage from Canada, misdeclared as “plastic scraps” for recycling, entered the country in 10 batches and subsequently intercepted by customs authorities.

After sitting in the ports, 26 containers of these trash consignments were illegally disposed of at the Metro Clark Landfill in Tarlac between June 26 to July 8, 2015, drawing the ire of local officials and residents.

Rose Maria said…
What do you think about Global Warming.?
Data Destruction E-Waste

Jhon Marshal said…
I have been reading your posts regularly. I need to say that you are doing a fantastic job. Please keep up the great work.
right angle drill adapter
Tuesday, May 24, 2016

Jhon Marshal said…
Thanks for taking the time to discuss that, I really feel strongly about it and love learning more on that topic. If achievable, as you gain competence, would you mind updating your blog with more information? It is highly helpful for me.
it support fort lauderdale
Friday, September 02, 2016

Jassal Jimmy said…
Thanks you have shared nice information, really impressive to me, we are providing IT support in west palm Florida
Wednesday, January 08, 2020