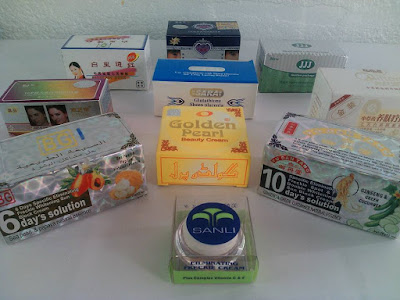 Aside from the more visible red blotchy skin, scar and uneven pigmentation, chronic exposure to mercury in skin whitening cosmetics may result in kidney damage and impaired renal function, a watchdog group for chemical safety and environmental health warned.

To demonstrate how some skin whitening creams are terribly contaminated with mercury, the group conducted test buys in Caloocan, Makati, Manila, Marikina, Parañaque, Pasay and Quezon Cities on June 10-12 and screened the products for mercury using a portable X-Ray Fluorescence (XRF) analyzer.

The group’s latest initiative is also part of their continuing campaign to push for the early implementation and ratification of the Minamata Convention on Mercury that the Philippine government signed in October 2013.

“These toxic creams, which are often religiously applied at night and in the morning, may lead to mercury accumulation in the body causing not only dermal, but also renal and central nervous system toxicity,” she said.

Citing a fact sheet on “Mercury in Skin Lightening Products” published by the World Health Organization, the EcoWaste Coalition said that “the main adverse effect of the inorganic mercury contained in skin lightening soaps and creams is kidney damage.”

According to medical literature, the inorganic mercury that enters the human body is deposited in the kidneys causing damage to the renal system, including acute tubular necrosis, nephrotic syndrome and reversible proteinuria.

Based on the XRF screening conducted, the following products were found to exceed the allowable limit of one part per million (ppm) for mercury in cosmetics under the ASEAN Cosmetics Directive:

The above products have no market authorization from the Food and Drugs Administration (FDA) and banned by the agency due to their mercury content.

As these cosmetics have mercury levels above the permissible limit, the EcoWaste Coalition urged users to immediately discontinue using these products and to consult licensed dermatologists or other health-care professionals for advice.

To prevent kidney damage and other adverse health effects, the group advised consumers to carefully read cosmetics labels and reject products of unknown composition or from doubtful sources, especially illegal imports that are aplenty in the market.
The group appealed to non-compliant Chinese  medicine  stores,  general  merchandise  retailers  and  beauty  and  herbal  supplement shops where most of these illegal imports are often sold to stop the unlawful trade and to offer only safe cosmetics with market authorization from the FDA.