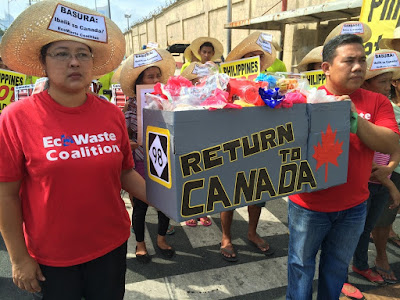 An environmental coalition has requested the Bureau of Customs (BOC) and the Environmental Management Bureau (EMB) to publicly release the data gathered through a government study regarding the content of some 48 abandoned shipping containers loaded with garbage from Canada.

The EcoWaste Coalition, a not-for-profit, non-governmental organization promoting chemical safety, zero waste and the people’s right to know and right to participate in the conduct of public affairs, asked for full data disclosure through a common letter sent to the BOC Commissioner Alberto Lina and EMB Director Jonas Leones today.

“In keeping with our watchdog role as a public interest environmental NGO, we respectfully request the BOC and EMB to disclose the results of the waste analysis and characterization study (WACS) conducted last June 19 on 16 of the 48 unclaimed shipping containers of Canadian garbage now lying at Subic Port,”  said Aileen Lucero, Coordinator, EcoWaste Coalition.

The “plastic scraps” were imported from Canada by Live Green Enterprise, based out of San Fernando City in Pampanga, without prior importation clearance as confirmed by EMB.  The consignments arrived in four batches between December 2013 to January 2014 and had since then left unclaimed.

“The immediate disclosure of the WACS results, along with the photographs taken, will remove the veil of secrecy surrounding the study, which was conducted without the civil society and the media being informed and invited to observe the activity,” Lucero said.

The EcoWaste Coalition had previously suggested to BOC that such inspection be conducted in a transparent way.

BOC Commissioner Lina had earlier written to the EcoWaste Coalition expressing that “the BOC appreciates (the group’s) efforts to helping and supporting the Philippine government, particularly the Bureau, in battling the illegal trade of hazardous wastes.”

Lina assured that “this administration remains committed in curtailing the illegal importations of these articles and that our ports will continue to be vigilant in monitoring all shipments coming in to our country.”

“As the Philippines is not a dumpsite for residual wastes masked as ‘plastic scraps’ for recycling, we urge both the BOC and the EMB to push for the immediate return of the botched garbage shipments for environmentally-sound disposal in Canada,” Lucero stated, reiterating a demand that is also shared by other concerned environmental, labor, church and party-list groups.

The EcoWaste Coalition had rejected the disposal of the illegal garbage shipments in a landfill facility in Capas, Tarlac, describing it as “a brazen travesty of environmental justice.”

“Allowing the landfilling of Canadian garbage into our soil would send a very wrong and dangerous signal to waste traders that the Philippines, despite the legal restrictions, is an open place where the refuse of affluent societies masked as ‘plastic scraps’ can be sent for disposal,” the EcoWaste Coalition told BOC and EMB.

“We need not belabor the fact that our country is already producing too much domestic waste, which is projected to increase from 38,757 tons per day in 2014 to 39,422 tons per day in 2015, and that our landfills, rightly described as “glorified dumpsites” by critics, are bursting at the seams,” the group emphasized.

What Pope Francis said in his encyclical letter “Laudato Si” that “the earth, our home, is beginning to look more and more like an immense pile of filth” resonates 100% in what is happening in our country today and that “permitting Canadian garbage to get disposed of locally would only aggravate the filthiness we find ourselves in,” the group noted.
In their letter to the BOC and EMB, the EcoWaste Coalition called upon the government to determinedly exhaust all means to compel Canada to take back their trash.

“This (the return of Canada’s trash) will demonstrate that our government means business when it comes to protecting the public health and the environment from illegal waste trade, and that garbage smugglers cannot get away with their criminal act with a mere slap on the wrist,” the group said.