Manila LGU Lauded for Seizing Deadly Oxalic Acid Sold in Streets, DENR Urged to Step In to Curb the Unauthorized Repacking and Sale of Oxalic Acid 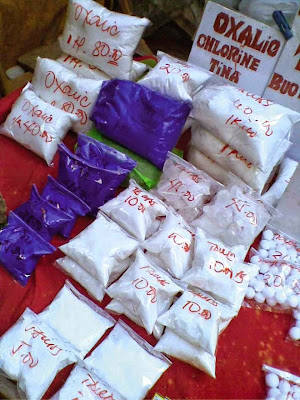 The EcoWaste Coalition, a toxics watchdog, commended the Manila City Government for confiscating repacked Oxalic acid that is illegally being sold by sidewalk vendors in Divisoria, Manila.

Government personnel from the Manila Health Department yesterday seized three sacks of the hazardous substance that street vendors of cleaning chemicals and cooking condiments in Divisoria are selling from as low as P20 per packet.

The operation came on the heels of the EcoWaste Coalition’s demand to ban the street sale of Oxalic acid that reportedly claimed the lives of Ergo Cha Milk Tea House owner William Abrigo and customer Suzaine Dagohoy as announced by the police authorities.

“The unchecked sale of toxic substances on the streets is a clear threat to public health and safety and should not be condoned,” said Thony Dizon, Coordinator of the EcoWaste Coalition’s Project Protect.

“We commend Manila’s health authorities for their swift action.  They should conduct more frequent random operations to clear the city’s streets of various contraband goods that pose hazards to human health and the environment,” he said.

In addition, the EcoWaste Coalition called on the Department of Environment and Natural Resources -  Environmental Management Bureau (DENR-EMB) to support Manila City Government’s action against the illegal trade of Oxalic acid.

“We urge the DENR-EMB to intervene and get to the bottom of this illegal street vending of Oxalic acid,” Dizon said.

As stated the Food and Drugs Administration (FDA), Oxalic acid is regulated by the DENR-EMB as per FDA Circular 2013-015 regarding the “Deregulation of Bulk Industrial Chemicals Used as Raw Materials in Cosmetic Products and Household Products Considered as Urban Hazardous Substances.”

According to the US Centers for Disease Control and Prevention (CDC), Oxalic is colorless crystals or white powder that can be absorbed into the body by inhalation of its aerosol and by ingestion.

“The substance is corrosive to the eyes, the skin and the respiratory tract and exposure above the occupational exposure limits may result in death,” the CDC said.The “immediately dangerous to life or health concentration” for Oxalic acid, according to the US National Institute for Occupational Safety and Health (NIOSH), is 500 milligrams per cubic meter.