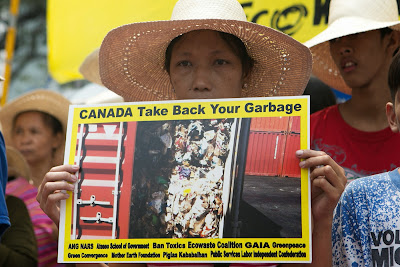 Through Senate Resolution 1341 filed last May 14, Santiago, an expert on constitutional law and international law, lashed the move to dispose of the 50 container vans of hazardous mixed wastes from Canada as this “sets a dangerous precedent for other countries to dump their waste in Philippine soil with impunity.”

“We are one with Sen. Santiago in asking the Aquino administration to exhaust all legal means to compel Canada to re-import their trash, including utilizing the Basel Convention to protect our country from turning into a pathetic landfill for world’s garbage,” said Aileen Lucero, Coordinator, EcoWaste Coalition.

“We thank her for amplifying our strong disapproval against the planned disposal of Canada’s hazardous waste in local facilities on environmental, health, occupational safety, ethical and legal grounds, and we hope President Aquino will listen this time,” Lucero said.

Santiago had earlier said: “I am alarmed that the government seems willing to say that we are an international trash bin out of fear of ruffling Canada’s feathers.”

In her resolution, Santiago underscored Canada’s responsibility as party to the Basel Convention on the Control of Transboundary Movements of Hazardous Wastes and Their Disposal, to take back the illegally exported waste, specifically citing Article 9 (2) of the said treaty, which Canada and the Philippines had both ratified.

In an apparent expression of her displeasure over the government’s decision to dispose of Canada’s trash locally, Santiago reminded the Aquino administration that “the arduousness of complaint or arbitration mechanisms before an international tribunal should not hinder the government from asserting that the export of wastes from Canada violates the Basel Convention.”

In September 2014, Santiago also filed Resolution 919 urging the Senate to investigate the botched Canadian garbage shipment in aid of legislation.

Canada’s refusal to take back their garbage shipment has received continuing public denunciation through protest activities held outside the Canadian Embassy in Makati City and even on the cyberspace with a petition on change.org being signed by over 25,000 individuals, including Canadians.

Outside the country, representatives of Ban Toxics, Basel Action Network, Earth Justice, International POPs Elimination Network and Pesticide Action Network marched to the Permanent Mission of Canada in Geneva, Switzerland last May 13, coinciding with the Conference of Parties of the Basel Convention.

Last year, environmentalists from 30 countries who were gathered in Kunming, China urged the governments of both Canada and the Philippines to ratify the Basel Ban Amendment, which prohibits hazardous waste transfer from developed to developing countries - even for recycling - to stop the deceitful and unethical waste dumping that has become a routine practice across the globe.

Link to Sen. Miriam’s Press Release re Resolution No. 1341:
http://senate.gov.ph/lis/leg_sys.aspx?congress=16&type=resolution