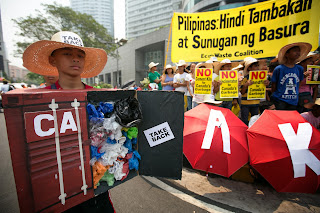 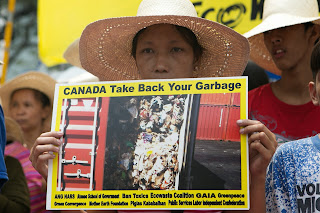 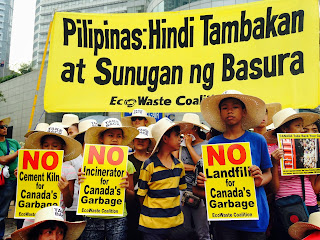 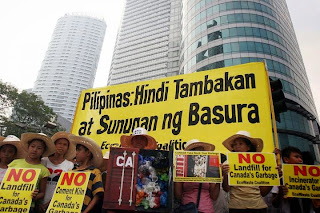 
Makati City. Filipinos braved sweltering heat to remind Canada of the illegally shipped 50 garbage-filled container vans languishing in Manila and Subic ports that it has yet to re-import.

The protest action coincided with President Benigno Aquino III’s State Visit to Canada from May 7 to 9.

Outside the Canadian Embassy in Makati City, protestors from the EcoWaste Coalition, Piglas Kababaihan and other allied groups raised a big banner that says “Pilipinas: hindi tambakan at sunugan ng basura” to assert that the Philippines is not a waste dumping and burning zone.

They held enlarged photos of the botched garbage shipment violating national and international laws as a reminder to President Aquino and Canadian Prime Minister Stephen Harper of the issue at hand.

They also brought a mock container van made of corrugated box with overflowing trash that has the phrase “Take Back” on the sides.

“Mindful of the threat posed to our people’s health and the environment by the mixed garbage, President Aquino should tell Canada to re-import their trash and Prime Minister Harper should not object to such a legitimate demand,” said Aileen Lucero, Coordinator of the EcoWaste Coalition, a watch group for environmental justice, chemical safety and zero waste.

“It will be scandalous for President Aquino to allow the imported trash to be landfilled in his home province Tarlac or elsewhere, incinerated in Cavite or used as alternative fuels for cement plants in Bulacan. Our communities should not be forced to bear the burden of increased environmental pollution due to Canada’s garbage,” she pointed out.

As parties to the “Basel Convention on the Control of Transboundary Movements of Hazardous and Their Disposal,” Canada and the Philippines must act with resolve to conclude the garbage shipment scandal to protect human health and the environment, the protestors said.

Citing the Convention text, lawyer Amang Mejia, EcoWaste Coalition’s counsel, stated that the Philippines “has the sovereign right to ban the entry or disposal of foreign hazardous wastes and other wastes in its territory.”

“Returning the unlawful garbage shipment, which government prosecutors had earlier determined to be in violation of the country’s laws, to the state of export and punishing the culprits will send a strong signal to waste traders that the Philippines does not condone illegal traffic of trash,” he said.

The Department of Justice in November 2014 said the shipment "falls squarely within the prohibited prohibitions" under RA 6969, the “Toxic Substances and Hazardous and Nuclear Wastes Control Act of 1990,” and DENR Administrative Order No. 28, Series of 1994, the “Interim Guidelines for the Importation of Recyclable Materials Containing Hazardous Substances.”