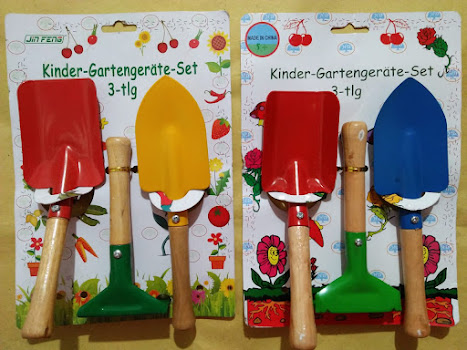 The toxics watchdog group EcoWaste Coalition urged manufacturers, importers, distributors and retailers of toy and childcare articles (TCCAs) to comply with the Food and Drug Administration's Notification Scheme to ensure that products sold adhere to quality and safety standards and would not pose health risks to children as consumers.
The group likewise urged TCCA dealers, including those engaged in e-commerce, to check if the items being supplied to them have a valid Certificate of Product Notification (CPN), as well as Certificate of Conformity (CoC) to the country’s national lead paint standard, before putting them on sale.
The group highlighted the importance of CPN and CoC following its discovery of lead-painted tools in one of two similar brands of “Kinder-Gartengerate-Set,” which translates to “children’s garden tools set,” sold in the market.
Based on the chemical screening conducted by the group using an X-Ray Fluorescence (XRF) device, the yellow shovel and red spade of Jin Feng Kinder-Gartengerate-Set had 27,100 to 18,100 parts per million (ppm) of lead, way above the 90 ppm limit under the Chemical Control Order for Lead and Lead Compounds.  No lead was detected on the green rake.
On the other hand, the paints on the blue shovel, green rake and red spade comprising the HD Kinder-Gartengerate-Set all screened negative for lead content.
“The non-detection of lead in some gardening tools marketed for children’s use is proof that TCCAs can be decorated with paints that will not pose lead poisoning risks to budding gardeners,” said Thony Dizon, Chemical Safety Campaigner, EcoWaste Coalition.
On the contrary, the group finds the detection of lead on Jin Feng kiddie shovel and spade worrisome as the lead-containing paint will surely age, peel and break with frequent use and cause the lead in paint to get discharged into the soil.
“Children may be exposed to lead if the contaminated soil gets into their hands and mouths as they learn how to grow plants.  Lead is toxic if swallowed by kids and can cause adverse health effects” said Dizon.
Adverse health effects of childhood lead exposure include damage to the brain and the central nervous system, slowed growth and development, learning difficulties, hearing and speech problems, and behavioral issues, which can result in lower IQ, decreased ability to pay attention and underperformance in school.
To avert this possibility, Dizon said retailers should make it a point to only offer notified TCCAs that meet safety standards and specifications such as the 90 ppm lead paint limit as required by law.
“Compliance to the Notification Scheme for TCCAs will help promote the implementation of the country’s lead paint regulation, which among other things bans the use of such paints for toys and other children’s products to prevent children’s exposure to lead,” said Dizon.
“Products, especially those marketed for children’s use, must also comply with the labeling requirements,” added Dizon who noted that both HD and Jin Feng gardening tool sets fail to provide basic labeling information such as details of their manufacturers or local distributors.
References:
Email Post