EcoWaste Coalition to the Public: Keep the Cemeteries Trash-Free 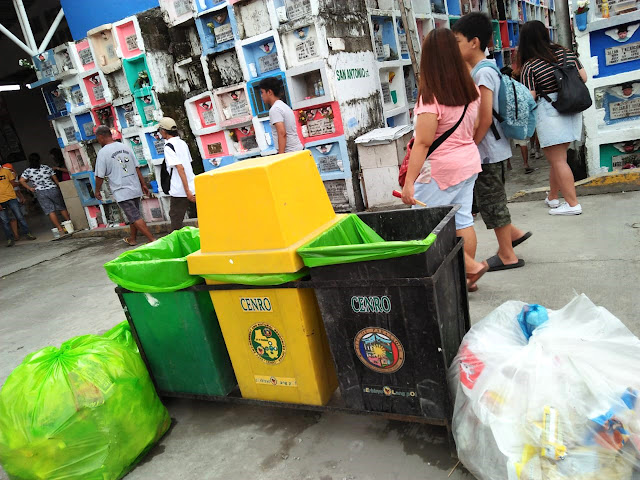 As visitors trickle into cemeteries to pay homage to their dearly departed ones, a waste and pollution watchdog reminded the public not to leave any garbage behind as a show of respect to the dead and to Mother Earth, too.
In anticipation of numerous visitors who will visit the graveyards before their temporary shutdown to prevent a spike in COVID-19 cases, the EcoWaste Coalition quickly reminded the public to keep all cemeteries garbage-free.
Fearing that some politicians and political parties might take advantage of Undas, the group likewise appealed to all eyeing the 2022 elections not to flood cemeteries and their vicinities with tarpaulins and other direct or indirect propaganda.
“Aside from the minimum public health protocols that all visitors must observe, we enjoin everyone to leave nothing but flowers and prayers in the cemeteries,” said Jove Benosa, Zero Waste Campaigner, EcoWaste Coalition.
“Littering in cemeteries disrespects the dead, the living and Mother Earth, too, and can no longer be tolerated,” he said, stressing that littering, an environmental offense, is never acceptable.
The group’s annual monitoring of Undas before the onset of the COVID-19 pandemic showed massive generation of mixed discards in various cemeteries, especially in Metro Manila, as millions swamped the cemeteries and unashamedly abandoned their discards such as food containers, wrappers and leftovers anywhere.
“Piles of garbage in every nook and corner, overflowing trash bins, and the truckloads of rubbish being hauled from cemeteries have become a familiar sight during the past observance of Undas,” lamented Benosa.
“Pandemic or no pandemic, we are called to observe Undas in a respectful way that will not transform our cemeteries into instant garbage dumps,” he said.
"We also appeal to all politicians and political parties, including party list groups, to refrain from putting up propaganda materials such as tarpaulins in cemeteries and adjacent places.  Let's keep our cemeteries free of garbage, as well as partisan politics," he added.
For a garbage-free visit to the cemeteries, the EcoWaste Coalition proposes the following eco-tips:
The group further asked those in charge of cemeteries to strictly enforce Republic Act 9003, or the Ecological Solid Waste Management Act, at all times, noting this law explicitly bans and penalizes littering, open dumping and open burning of discards.
Cemeteries in Metro Manila will be closed from October 29 to November 2 as approved by the region’s 17 mayors comprising the Metro Manila Council (MMC), the governing and policy making body of the Metro Manila Development Authority (MMDA).
The MMC through MMDA Resolution No. 21-22 directed local government units in the region to pass ordinances or resolutions restricting access to 29 public and private cemeteries, memorial parks, and columbaria to prevent mass gatherings and the spread of the COVID-19.
Email Post