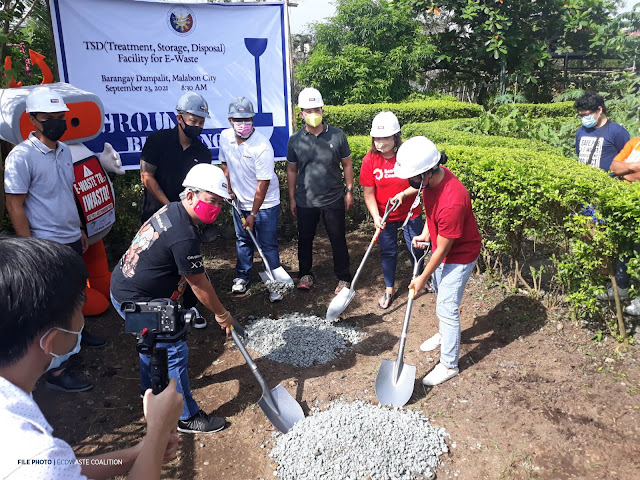 The Implementation of PCB Management Programs for Electric Cooperatives and Safe E-Wastes Management (PCB-WEEE Project) broke ground on the site of the 2nd E-waste Treatment, Storage, and Disposal (TSD) Facility at Brgy. Dampalit, Malabon, Quezon City last September 23, 2021.
In the presence of the Environmental Management Bureau (EMB), EcoWaste Coalition, and the United Nations Industrial Development Organization (UNIDO)-Philippines project partners, a ceremonial marker was unveiled, together with the barangay local government of Dampalit in Malabon City and Barangay 108 in City of Manila as the main beneficiaries of the facility. The TSD facility will process cathode-ray tube (CRT) or glass video displays from television sets collected from Malabon and nearby barangays of Tondo in the City of Manila.
“We’re beyond thrilled and thankful to be one of the chosen beneficiaries of this project, which will help our constituents who are working in the informal e-waste sector to have an access to a safe workplace while having a more sustainable livelihood,” said Kap. Carlo Jay R. Dumalaog of Barangay Dampalit.
“The support of the national agencies to our local barangays will be a key factor for the success of this endeavor. I believe that with the synergistic effort from all the project’s shareholders and beneficiaries in upholding the project’s objectives, nothing will be impossible and, together, we can be victorious,” emphasized Mayor Antolin Oreta III of Malabon City.
“The success of the e-waste facility in Bagong Silang, Caloocan City inspired us to replicate it here in Bgy. Dampalit, Malabon, with the cooperation of Globe Telecom, Inc. as a new private industry partner,” explained by Engr. Marcelino Rivera, Jr., OIC Chief of the Environmental Quality Management Division (EQMD) of EMB.
Brgy. Capulong in Tondo, Manila and Brgy. Longos in Malabon City are two of the barangays identified by the project to have communities belonging to the informal e-waste sector and where activities, such as hazardous dismantling and disposal of e-waste residuals, are prevalent. These activities, when mishandled and executed in an unsafe manner, would expose the workers and the environment to the toxic substances present in E-wastes, such as lead, arsenic, mercury, and PBDE, among others. In addition, the said E-waste facility aims to advance the shift of the informal e-waste sector to a formal one through enabling infrastructural assistance and conduct of capacity building programs for safer collection, dismantling, and storage of e-wastes.
“Through the establishment of the E-waste TSD Facility, we, as informal waste workers, will have an opportunity to be part of a formal sector where there is an access to a safe workplace and operation and where we can have a sustainable livelihood without endangering our personal health, our community’s health, as well as the environment,” stated Joanna Amican of Nagkakaisang Lakas ng mga Mangangalakal ng Longos.
The TSD facility will be established under a Global Environment Facility (GEF) funded DENR-UNIDO project entitled “Implementation of PCB Management Programs for Electric Cooperatives and Safe e-waste Management,” through an infrastructural and operational upgrading of an existing Materials Recovery Facility (MRF) in Brgy. Dampalit to a DENR-accredited TSD facility. DENR-EMB and UNIDO serve as the primary project proponents, ensuring end-to-end program implementation. For its part, the IRI will provide training and technical support to the facility’s operations; Ecowaste Coalition will be the main networking and awareness-raising arm of the communities of the informal e-waste recyclers; while the local government of Brgy. Dampalit will assist in converting their existing materials recovery facility into a DENR-accredited TSD facility, as well as its institutionalization. As a private industry partner, Globe Telecom Inc.’s co-financing initiative would support the establishment of the TSD facility and its operation through its E-waste Zero Program.
Email Post