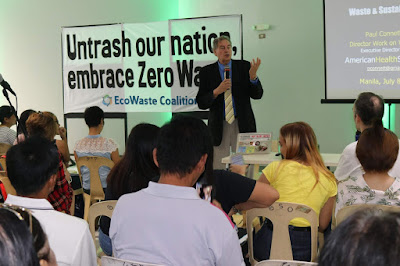 As the observance of the Zero Waste Month this January enters the home stretch, visiting British scientist-turned-activist Dr. Paul Connett dismissed incineration as “the biggest obstacle to Zero Waste” as he urged decision makers to uphold the incineration ban under the country’s major environmental laws.

Connett is in town as a visiting technical expert of the EcoWaste Coalition, No Burn Pilipinas and other environmental health groups who have stepped up the fight to protect the incineration ban from being lifted and to unmask the false claims of incinerator promoters.

As lawmakers consider bills that will rescind the ban on waste incineration under the Clean Air Act and the Ecological Solid Waste Management Act and remove barriers to the construction of “waste-to-energy” incineration plants,  Connett expressed the need for legislative support to zero waste as a goal and strategy.

Among these legislative measures are House Bill 2286 introduced by Aklan First District Representative Carlito Marquez, which aims to repeal the incineration ban, and Senate Bill 363 filed by Senator Win Gatchalian, which, among other things, seeks to exempt waste-to-energy facilities from the said ban.

“We have to move from the back-end of waste disposal to the front-end of resource management, better industrial design, and a post-consumerist way of life.  In both industry and our daily lives, we have to get waste out of the system.  We need a zero waste strategy, not an incineration strategy, to make it happen,” said Connett.

Connett highlighted several arguments against waste incineration, including the formidable costs involved in constructing, operating and maintaining the facility, the creation of very few long-term jobs for the community, the production of toxic ash that nobody wants, and the generation of hazardous air emissions and nanoparticles.

“The claim that incinerating waste can be used to recover energy or produce electricity makes good marketing gimmick, but the reality is that if energy conservation and recovery is the goal, then more energy can be saved through composting and recycling,” he said.

Connett has outlined the following steps to make zero waste community a reality: source separation; door-to-door collection; composting; recycling; reuse, repair, and deconstruction; a "pay as you throw" policy for residuals; the location of a Zero Waste Research Center in every major city; residual separation facilities built in front of landfills;  interim landfills for the biologically stabilized organic residuals and currently non-recyclables.

During his short stay in the country, Connett will interact with academicians, lawmakers, local government officials, civil society leaders and the media about waste issues and solutions. Connett is author of the book “The Zero Waste Solution: Untrashing the Planet One Community at a Time.”

From 1983 -2006, Connett taught chemistry at St. Lawrence University in Canton, New York where he specialized in Environmental Chemistry and Toxicology.

Over the past 35 years, his research on waste management has taken him to 49 states in the US, seven provinces in Canada and 67 other countries where he has given over 2,500 pro bono public presentations.