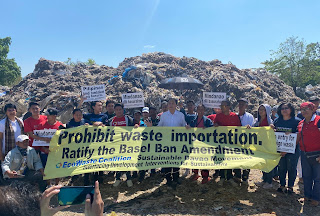 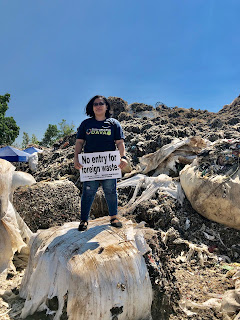 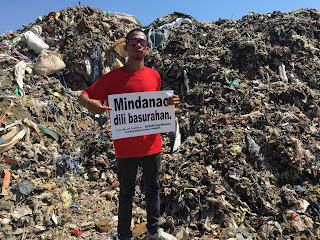 The container ship carrying the 2,400 metric tons of illegal waste shipments to be returned to South Korea had finally left the Mindanao International Container Terminal (MICT) in Tagoloan, Misamis Oriental.

After staying for some 19 months at the Verde Soko compound at the Phividec Industrial Estate in the town of Tagoloan, the illegal waste imports from South Korea left the MICT port early Tuesday morning aboard MV Nordmarsh as confirmed by the Bureau of Customs-Region 10 (BOC-10) to the EcoWaste Coalition.

The remaining 2,700 tons of South Korean waste are expected to be shipped back on February 9 after being repacked and transferred from the Phividec facility to the MICT stockyard.

BOC-10 Port Collector John Simon reported that the government of South Korea shouldered the shipping cost amounting to P10 million in keeping with the “Basel Convention on the Control of Transboundary Movements of Hazardous Wastes and their Disposal” of which both the Philippines and South Korea are state parties to.

Article 9 of the Basel Convention states that “in case of a transboundary movement of hazardous wastes or other wastes deemed to be illegal traffic as the result of conduct on the part of the exporter or generator, the State of export shall ensure that the wastes in question are taken back by the exporter or the generator or, if necessary, by itself into the State of export.”

“We are breathing a sigh of relief now that the first batch of the contaminated plastic waste wrongly declared as ‘plastic synthetic flakes’ has departed,” stated Aileen Lucero, National Coordinator, EcoWaste Coalition, which has participated in multi-stakeholders’ meetings attended by South Korean government representatives to resolve the issue.

"Kudos to our vigilant customs, environmental and local government officials in Misamis Oriental, and to the Filipino people,  for remaining steadfast in our shared duty to protect our country from the illegal traffic of hazardous wastes and other wastes," she said.

“We hope the next re-exportation schedule for the remaining 2,700 tons of unlawful waste shipments would be the final one, and that both South Korea and the Philippines would take bold and resolute steps to prevent the recurrence of illegal and immoral waste trafficking,” she emphasized.

‘We particularly urge the governments of South Korea and the Philippines to strengthen their commitments as parties to the Basel Convention by ratifying the Basel Ban Amendment,” she added.

The Basel Ban Amendment, which entered into force on December 5, 2019, prohibits member states of the Organization for Economic Cooperation and Development (OECD), the European Union (EU), and Liechtenstein from exporting hazardous wastes to developing countries or countries with economies in transition.

“To protect human health and the environment, upstream and downstream and prevent environmental injustice, in particular in developing and transition countries, all Basel Parties should ratify (the amendment) at the earliest possible date,” according to a primer published by the Basel Action Network (BAN) and the International Pollutants Elimination Network (IPEN).