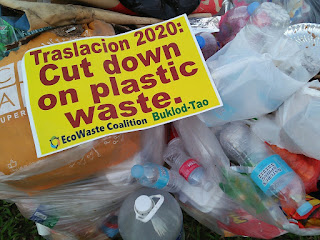 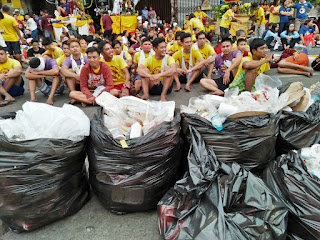 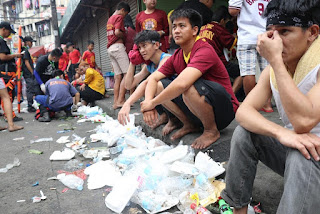 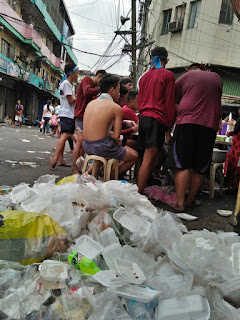 The wasteful re-enactment yesterday of the Traslacion of the revered image of the Black Nazarene  from Luneta to Quiapo has again tarnished what should have been a celebration of deep faith amid difficult times.

The EcoWaste Coalition, a proponent of a zero waste and toxics-free society, scored the deplorable trash-strewn streets of Quiapo, as well as the Quirino Grandstand Parade Ground at Rizal Park, following the 6.16-kilometer procession that lasted for 16.5 hours.

Despite the reduced volume of garbage collected from yesterday's celebration attributed mainly to the “zero vendor” policy, the group observed that the thoughtless dumping of mostly plastic trash refuses to die out despite repeated appeals from church, local government and civil society leaders.

“The call for an environmentally-responsible expression of piety and devotion to the Black Nazarene again fell on deaf ears,” stated Jove Benosa, Zero Waste Campaigner, EcoWaste Coalition, noting that “many of the devotees have yet to internalize our shared responsibility to be good stewards of Mother Earth.”

“However, we remain confident that the situation will improve in the coming years as more devotees listen and respond to the call for ecological conversion, which is essential as the nation confronts the impact of global plastic, chemical and climate crisis,” he added.

At the site of the overnight vigil in Rizal Park, the group saw bins and bags teeming with mixed garbage, including sleeping materials, food leftovers, urine-filled plastic bottles, dirty diapers, and hordes of single-use plastics (SUPs).

“Despite the signage warning visitors that the law penalizing littering is 'strictly' enforced in the sprawling park, some people recklessly threw their rubbish anywhere, which other people had to pick up,” he observed.

Armed with broomsticks and tongs, 50 members of the EcoWaste Coalition, mostly members of the informal waste sector, joined hundreds of government workers and volunteers from church, school and environmental groups in cleaning up the mess left by the devotees at the park.

While quick cleanup is needed, it doesn't really make the Traslacion's trash to disappear as the disposable plastics collected are simply stored years and years in a landfill, the group said.

In Quiapo district, Basura Patrollers of the EcoWaste Coalition found the streets littered with plastic water bags, cups, bottles, and polystyrene food containers, some of which were given free to the devotees by well-meaning clubs and families performing “pa-karidad” or charity work.

“There’s plastic garbage in every nook and corner, especially in places where devotees gather together to rest and wait for the andas (carriage) to arrive,” he said.

The EcoWaste Coalition urged the church and local government authorities, together with the faithful, to implement long-term solutions that will bring the wastefulness of Traslacion, as well as other religious feasts, to a close.

The group further asked the authorities to decisively act against the unrestrained production, consumption, and disposal of SUPs, stressing that Pope Francis himself had appealed for real action to solve what the pontiff described as the “emergency” of plastics dirtying the seas and oceans.

"Our yearning for a plastic-free and trash-less Traslacion remains elusive, but not necessarily unattainable if all the concerned sectors will cooperate and act," the group said.