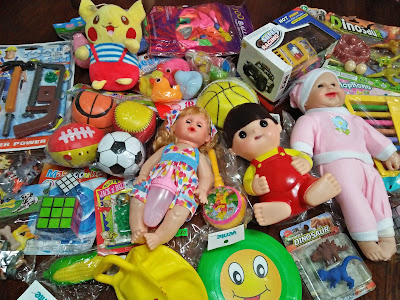 Seventy-five days after the long-delayed Implementing Rules and Regulations (IRR) of Republic Act 10620, or the Toy and Game Safety Labeling Act of 2013, finally took effect, some toys being sold in the market are still improperly labeled depriving consumers with an essential tool to ascertain which toys are suitable and safe for children to play with.

The EcoWaste Coalition, an environmental and health watchdog group, made this observation after examining 27 toys for compliance to Rule 1 of RA 10620’s IRR regarding the general labeling requirements for toys and games manufactured locally or internationally that are imported, exported, donated, distributed and sold in the Philippines.

“We regret that some toys in the market do not conform with RA 10620-prescribed mandatory labeling requirements, denying consumers of their basic right to information which is indispensable in the selection of age-appropriate, safe and non-toxic play things that all children deserve,” said Thony Dizon, Chemical Safety Campaigner, EcoWaste Coalition.

The provision of information and education to facilitate sound choice and the proper exercise of rights by the consumer is also guaranteed by another law, Republic Act 7394, or the Consumer Act of the Philippines, Dizon pointed out.

“Our latest sampling indicates the need to effectively enforce RA 10620 and its IRR.  Its effective enforcement will serve the interest of consumers, especially young children whose safety is the central reason why this law was enacted.  The continued sale of contaminated toys also reaffirms the need for a supplemental law that will eliminate hazardous chemicals in children’s products such as toys,” he said.

The EcoWaste Coalition is optimistic that the effort of the Food and Drug Administration (FDA) to orient stakeholders about the IRR starting with a seminar tomorrow, August 7, at the Department of Health headquarters will help in promoting strict compliance to RA 10620 and its requirements.

The assorted toys, including balloons, dolls, physical activity toys, stuffed toys and traditional toys like turumpo, were obtained by the group for P5 to P350 each on August 3-5 from diverse retailers doing business in Makati, Manila, Pasay and Quezon Cities.

Out of 27 toy samples, not even one was compliant to the general requirements for toy labels as stated in Rule 1.

-- 12 samples displayed no cautionary statements such as “Warning: Not suitable for children under 3 years.  Contains small parts” or its equivalent graphical symbol;

-- 27 samples had no usage instructions;

-- 24 samples provided zero or incomplete name and address of the toy manufacturer or distributor; and

Rule 1 further requires that the label must be generally written in English, visible, easily legible, understandable and indelible form, and the product itself must be accompanied by an instructional literature for perusal or examination by the buyer.

“The labeling information in some sample toys are microscopic to be read and understood and thus requiring the use of a magnifying glass,” Dizon observed.

“Additionally, we also found some samples contaminated with chemical substances like lead and phthalates that are banned in children’s toys,” he said.

Dizon cited a xylophone whose orange metallic bar is coated with lead paint exceeding the 90 parts per million (ppm) maximum limit, as well as a plastic doll laden with banned DBP and DEHP phthalates above the 0.1% limit.   The group also found a set of art nails for kids that comes with an adhesive containing DBP phthalate.

Signed into law by former President Benigno Aquino III on September 3, 2013, RA 10620’s IRR took an extremely long time to draft and finalize.  To compel the Departments of Health and Trade and Industry to issue the IRR, the EcoWaste Coalition and Laban Konsyumer Inc., joined by 20 mothers as co-petitioners, lodged a petition for a Writ of Mandamus at the Quezon City Regional Trial Court on October 23, 2018.

After 2,074 days, the IRR of RA 10620 was finally signed on January 20, 2019 by Health Secretary Francisco Duque III and Trade and Industry Secretary Ramon Lopez.   It took another 109 days to get the IRR published on May 9, 2019 in newspapers of national circulation.