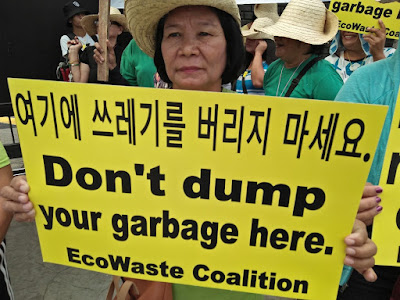 The environmental health and justice group EcoWaste Coalition today pushed the government of South Korea to act on the 5,177 tons of illegal waste exports that continue to languish in Mindanao for over a year now despite repeated assurances from Seoul to take them back “as soon as possible.”

Through a letter sent today to President Moon Jae-in, which was copied to Environment Minister Cho Myung-rae and Ambassador Han Dong-man, the group urged the South Korean authorities “to immediately act on this pressing issue and not allow the controversy to drag on like what happened to the infamous garbage from Canada that finally left the Philippines last 30 May after six long years.”

The group’s latest move against foreign waste dumping came on the heels of the efforts by several Asian countries, particularly the Philippines, Cambodia, Indonesia, Malaysia, and Sri Lanka, to send back container-loads of contaminated plastic wastes and other refuse  to their affluent sources like Australia, Canada, France, Germany, Hong Kong, Japan, Saudi Arabia, United Kingdom and United States.

“We urge the South Korean government to undertake immediate re-exportation of their 5,177 tons of illegal bulk waste exports that are still in the Philippines despite the agreement reached at a bilateral meeting between the two governments to have these wastes repatriated to their origin,” wrote Aileen Lucero, National Coordinator, EcoWaste Coalition.

“Over 45 days have lapsed since the said meeting and we see no progress in the re-exportation arrangements for the misdeclared plastic synthetic flakes that arrived in the Mindanao on 21 July 2018.  One year has already gone by and the illegal waste shipments are still waiting to be shipped back to South Korea,” she lamented.

“We look forward to celebrating the departure of the illegal waste cargoes from South Korea to their origin,” she added.

Last June 13, 2019, at a bilateral meeting held at the Mindanao Container Terminal (MCT) Complex in the municipality of Tagoloan, province of Misamis Oriental, the Korean panel led by Mr. Young-Dae Jeong, Director General, Environmental Management Bureau, Ministry of Environment, agreed that “the Government of Korea in accordance with its existing laws, rules and regulations shall start the shipping procedure from the Port of Tagoloan to Korea as soon as possible.”

“Consistent with our role as an environmental health and justice watchdog group, the EcoWaste Coalition will monitor the re-importation of the said illegal waste exports by South Korea in line with the provisions of the Basel Convention on the Control of Transboundary Movements of Hazardous Waste and Their Disposal,” Lucero said.

“In defense of our people’s right to a balanced and healthful ecology as guaranteed by our Constitution, we will oppose all forms of foreign waste dumping into our shores and will resist plans to have the 5,177 tons of South Korean waste landfilled or incinerated in the Philippines,” she emphasized.

In their latest letter to the South Korean government, the EcoWaste Coalition cited the November 2018 press release by the Embassy of the Republic of Korea in November 2018 stating that “the Ministry of Environment (had) initiated legal procedure to have the wastes in question in the Philippines be brought back in accordance with Article 20 of the Law on Cross-border movement and Disposal of Wastes—Prior Notice of Repatriation Order—and embarked on investigation of the violation of Article 18-2 of the said law—False Export Declaration.”

The said press release also mentioned that “relevant authorities of Korea will have the wastes in question be repatriated and properly disposed and work to prevent recurrence of the problem.”

While appreciating the re-export of nearly 1,400 tons of containerized contaminated plastic wastes to Pyeongtaek City last January 13, 2019, majority of the illegally exported wastes from South Korea amounting to 5,177 tons are still in the country.

To recall, the 5,177 tons of bulk wastes, which the authorities determined as “misdeclared, heterogenous and injurious to public health,” have been sitting since July 2018 at the premises of Verde Soko Philippines Industrial Corp., the consignee, inside the PHIVIDEC Industrial Estate in Sitio Buguac, Barangay Santa Cruz, Tagoloan, Misamis Oriental.

As stated in the re-exportation order issued by the Bureau of Customs-Region 10 last December 2018, “the shipment was found to be heterogenous and contained household hazardous waste constituting a violation under DENR Administrative Order 2013-22.”  According to this regulation, “no importation of heterogenous and unsorted plastic materials shall be allowed.”

http://overseas.mofa.go.kr/ph-en/brd/m_20312/list.do (please see press release entitled “The imported waste to the Philippines to be brought back to Korea”)
Email Post