Group Backs Neutral, As Well as Lead-Safe, Desks for Students 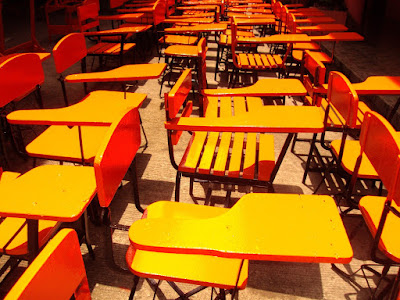 The environmental and health advocacy group EcoWaste Coalition welcomed the signing of a new law requiring all schools to provide neutral desks to all students.

At the same time, the EcoWaste Coalition reminded school authorities to ensure that student chairs and tables should be compliant to Department of Education (DepEd) Order No.4, series of 2017 requiring the use of lead-safe coatings or paints in all preparatory, elementary and secondary schools.

“We welcome the obligatory provision of neutral desks to all students as this will prevent neck, shoulder and back strain associated with the use of regular armchairs by left-handed students.  With the provision of such desks, we can expect all students to sit and study comfortably,” said Thony Dizon, Chemical Safety Campaigner, EcoWaste Coalition, who is left-handed himself.

Under a proposed DepEd five-year replacement plan, the 18 million armchairs currently used in public schools nationwide could be replaced with neutral desks at a cost of over P16 million per year.

“As the non-neutral desks are replaced with neutral ones, we remind school authorities to ensure that all replacements are not coated with lead-containing paints consistent with the DepEd directive on the mandatory use of lead-safe paints in schools,” he added.

According to DepEd Order No. 4 issued by Education Secretary Leonor Magtolis Briones in 2017, “lead is one of the identified toxic and regulated chemicals that pose hazards and risks to human health and the environment.”

To avoid children’s exposure to lead, “the use of independently certified lead-safe paints/coatings shall be mandatory to all painting and/or repainting works of school facilities, building, amenities, other structures, furniture, fixtures, learning materials, tools and equipment,” according to DepEd.

While the replacement plan for the non-neutral desks is being implemented, the EcoWaste Coalition further requested the government to initiate an inventory of painted desks in all the country’s schools .

The inventory should help the authorities in devising an action plan to screen painted desks for lead content and to prioritize the replacement of those desks that could pose lead exposure risk to students, the group said.