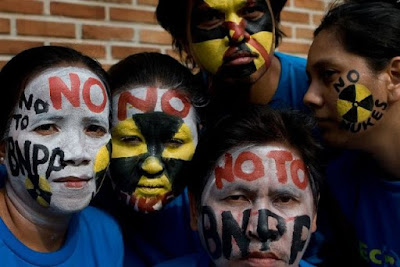 The EcoWaste Coalition, a non-profit watch group on waste and pollution issues, urged the government to junk the plan to activate the “monster of Morong,” a monicker for the mothballed Bataan Nuclear Power Plant (BNPP).

“We urge our policy makers not to wake up the sleeping ‘monster of Morong’ from its 40-year slumber.  It’s better to keep the plant idle rather than to create a highly toxic problem that our nation cannot handle,” said clean air and renewable energy advocate Rene Pineda of the EcoWaste Coalition.

On top of the safety issues that have haunted the controversial facility, Pineda pointed to the country’s lack of capacity to manage the plant’s byproduct nuclear waste if ever it is operated.

“How do BNPP pushers intend to manage, store and dispose of the tons of highly toxic waste that will be generated when we cannot even effectively deal with our ordinary household discards?,” he asked.

“Where will they store the radioactive waste that is totally secured from any seismic or volcanic damage knowing that the BNPP is sited on an earthquake fault line and near Mt. Natib, a potentially active volcano?,” he further asked,


“Nuclear waste disposal is a huge problem even in highly industrialized countries like the USA,” he pointed out.

The Union of Concerned Scientists based inUSA has warned that  “the resulting waste disposal problem has become a major challenge for policymakers”  as “nuclear fuel remains dangerously radioactive for thousands of years after it is no longer useful in a commercial reactor.”


While reiterating its opposition against nuclear energy – dubbed as the most costly and most dangerous source of power-- the EcoWaste Coalition renewed its support for clean energy sources that are safe, non-toxic, climate-friendly and sustainable.

“Instead of going nuclear, the Philippines should go all-out for clean, safe and renewable energy sources that are plentiful in our country,” it said.

Considering the Duterte government’s commitment to freedom of information, the group likewise appealed to the  authorities to publicly disclose the results of a confidential study on the BNPP commissioned by the government in 1988-92.

The study purportedly did not support the activation of the plant due to safety issues.