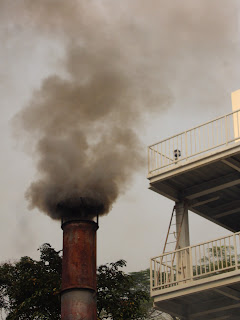 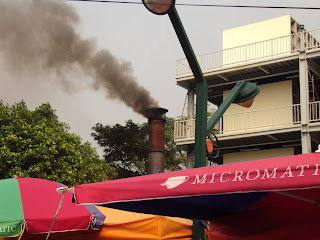 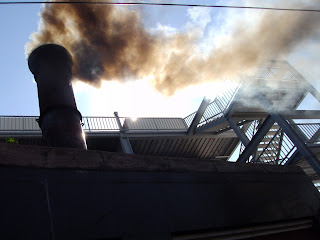 A waste and pollution watch group has urged the administration of Mayor Joseph “Erap” Estrada to initiate urgent measures that will make the Manila North Cemetery Crematorium compliant with Republic Act 8749, the Clean Air Act.

The EcoWaste Coalition sought Estrada’s help in improving the facility after obtaining confirmation from the Environmental Management Bureau – National Capital Region (EMB-NCR) last Friday, November 25, that the facility has no valid Permit to Operate.

The group had earlier notified Estrada that the crematorium’s Permit to Operate issued by the EMB-NCR on May 13, 2009 had expired on May 13, 2014.  The Clean Air Act, which then President Estrada signed into a law in 1999, requires all sources of air pollution covered by this law to have a valid Permit to Operate.

Photos taken by the group on October 25 and November 5 this year and submitted to both the Office of Mayor Estrada and the EMB-NCR showed thick dark smoke being emitted from the crematorium’s stack.


“While we have no idea on the actual toxicity of the gaseous emissions coming from the crematorium stack at the time when the photos were taken, studies have shown that crematories discharge various types of environmental pollutants, including carbon monoxide, nitrogen oxide, sulphur dioxide, hydrogen chloride, dioxins, furans, formaldehyde and mercury vapor, as well as minuscule particulate matters,” wrote Aileen Lucero, EcoWaste Coalition’s National Coordinator, to Estrada.

“We are particularly concerned that mercury, a neurotoxin, is being emitted into the atmosphere from the dental amalgam of deceased persons being cremated,” she added.

According to the “Mercury Inventory and Assessment in the Philippines” published by the Department of Environment and Natural Resources (DENR), the total mercury output or emission from crematoria is 1,530 kg of mercury per year.  This constitutes 0.65% of the 234,031 kg of mercury emitted to the country’s environment from different source categories.

“We bring this matter to your urgent attention as the crematory may be operating in a manner that is jeopardizing the health of facility workers and other Manileños,” Lucero told Estrada.

The stack emissions may be affecting candle and flower vendors in the vicinity, the commuters passing through the ,  and  and residents of Barangay 370 and other downwind neighborhoods, as well as the  and Chinese General Hospital Colleges, the group observed.

Based on the probe conducted by the EMB-NCR in response to the notification made by the EcoWaste Coalition, the Manila North Cemetery Crematorium violated Section 1, Rule X1X of RA 8749 for operating its cremation furnace without a valid Permit to Operate and for its failure to submit self-monitoring reports of its emission rates.

The facility also violated Section 2, Rule XXV for emitting black smoke comparable to Shade No. 4 on the Ringelmann Chart, which is a scale used for comparing the density of smoke rising from stacks.

"Upgrading the Manila North Cemetery Crematorium and making it compliant with the Clean Air Act will be consistent with Mayor Estrada's desire to clean up the capital.  The right to breathe clean air is a fundamental right that must be protected," the EcoWaste Coalition noted.

Estrada last week said that he envisions a clean and orderly to be his legacy when he retires from public service.