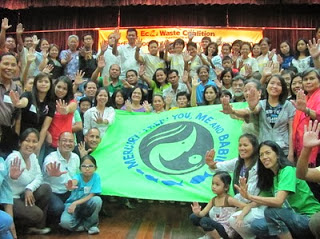 While commending the government’s decision to finally ratify the Paris Agreement, which entered into force on November 4, 2016, a waste and toxic watch group reminded President Rodrigo Roa Duterte not to forget the other treaty awaiting for his signature.

Following the decision by the Cabinet to ratify the Paris Agreement, the EcoWaste Coalition urged the Duterte administration to also ratify the Minamata Convention on Mercury, which the Philippine government signed on October 10, 2013.  Then Department of Environment and Natural Resources (DENR) Secretary Ramon J.P. Paje signed the treaty at a diplomatic conference held in Kumamoto, Japan

The treaty named after Minamata, a Japanese city where severe mercury pollution from an industrial source poisoned thousands of people, provides for controls and reductions across a range of products, processes and industries where mercury is used, released or emitted.

The DENR, particularly the Environmental Management Bureau, actively participated in the three-year international negotiation of the Minamata Convention, noted the EcoWaste Coalition. The DENR has prepared a Ratification Dossier for the said treaty with assistance from the United Nations Institute for Training and Research and the Swiss Confederation.

As of today, only 33 out of the 128 countries that signed the Minamata Convention have ratified it.  It will enter into force 90 days after the 50th ratification.

“We support the DENR in pushing for the government ratification of the Minamata Convention and in obtaining the concurrence of the Senate.  Thus we appeal to President Duterte and his Cabinet to ratify it and back its early implementation, with full participation of public interest groups, to protect the public health and environment from toxic mercury pollution,” stated Aileen Lucero, National Coordinator, EcoWaste Coalition.

“To be among the first 50 countries to ratify the mercury treaty will bring honor and recognition to our nation and people,” she added.

According to the Ratification Dossier, by implementing restrictions on the importation and use of mercury and mercury-containing products, the Minamata Convention will reduce the amount of mercury consumption in the country, and therefore, minimize their subsequent release and adverse effects to the environment.

The implementation of the Minamata Convention will also increase public awareness on the effects of mercury exposure to human health and the environment, as well as on economically-viable alternatives, the dossier explained.

Yoichi Tani, representative of the Collaboration Center for Minamata Disease Victims, who visited Manila last month, had earlier encouraged governments in Asia and the Pacific to ratify the mercury treaty.

“As we have painfully experienced in Minamata, mercury emissions and releases can gravely contaminate the ecosystems and seriously harm public health, especially the health of vulnerable groups such as women and children.  Action is needed on a global scale to prevent Minamata disease from destroying lives and causing terrible human sufferings.  This is why it is important for governments to ratify the treaty,” he said.

As stated in the preamble of the Minamata Convention, parties “recogniz(e) the substantial lessons of Minamata Disease, in particularly the serious health and environmental effects resulting from the mercury pollution, and the need to ensure proper management of mercury and the prevention of such events in the future.”

“Mercury and its various compounds have a range of serious health impacts, including brain and neurological damage, especially among the young,“ according to the United Nations Environment Programme.