Environmentalists Back UNICEF’s Call for Action vs. Air Pollution for Children’s Health and Welfare 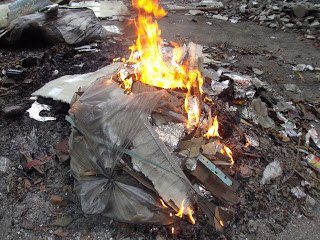 Local environmental leaders have aligned themselves with the call by UNICEF, the United Nations’ agency promoting the rights and well-being of every child, to cut air pollution for children’s health.

UNICEF last week released the report “Clear the Air for Children,” which “points out that around 300 million children live in areas where the air is toxic – exceeding international limits by at least six times – and that children are uniquely vulnerable to air pollution, breathing faster than adults on average and taking in more air relative to their body weight.”

The EcoWaste Coalition and PCA specifically drew attention to UNICEF’s warning that “open burning of waste is highly hazardous for public health.”

“The open burning of waste is a large source of toxic air pollutants such as particulates, carbon monoxide, black carbon, dioxins, furans and mercury. These are highly toxic and/or carcinogenic pollutants,” the UNICEF warned.

UNICEF also noted that “women and children often carry out hazardous disposal practices such as the open burning of waste in the absence of regular collection services.”

On the other hand, “better waste management can reduce the amount of waste that is burned within communities,” the UNICEF said.

“We request our national and local authorities and the general public to actively back UNICEF’s call to clear the air for children’s health.  We call on all Filipinos not to add to the air pollutants in the environment by consuming responsibly, by reducing what we throw away and by not burning waste resources, which could be reused, recycled or composted instead,” said Aileen Lucero, National Coordinator, EcoWaste Coalition.

The genuine enforcement of the Ecological Solid Waste Management Act, which bans the open dumping and open burning of trash, and the Clean Air Act, which bans the incineration of municipal, biomedical and hazardous wastes that emits poisonous and toxic fumes, will contribute tremendously to making the air safe to breathe for children and everyone else, the group said.

For his part, Rene Pineda, President, PCA, said: “Aside from stopping waste burning in all its forms, action is needed to reduce air pollution from coal power plants and industrial facilities, as well as from vehicles, planes and ships.  Our children and their children will be better off if we invest more in zero waste resource management, energy efficiency and renewable energy sources rather than on fossil fuel combustion and waste-to-energy incineration.”

Pineda also stressed the need for the environmentally sound management of hazardous waste such as electronic waste or e-waste, which are often dismantled in uncontrolled conditions or burned to retrieve and recycle valuable materials such as aluminum, copper, iron, tin, etc.

According to UNICEF, “children are more susceptible than adults to both indoor and outdoor air pollution as their lungs, brains and immune systems are still developing and their respiratory tracts are more permeable.”

“The most disadvantaged, who already tend to have poorer health and inadequate access to health services, are the most vulnerable to the illnesses caused by polluted air,” it pointed out.

UNICEF said “studies have shown that air pollution is strongly associated with respiratory conditions such as pneumonia, bronchitis and asthma, among others. It can also exacerbate underlying health issues and prevent children from going to school, and there is emerging evidence that it can disrupt physical and cognitive development.”

“Left untreated, some health complications related to air pollution can last a lifetime,” it warned.