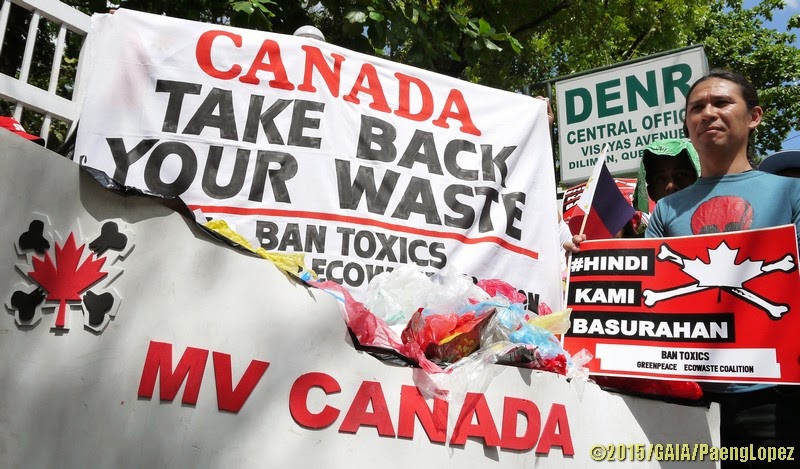 Manila, Philippines – Environmental and public health groups tell the Philippine government agencies to be more courageous against the dirty tactics of Canada concerning the latter’s illegal waste exports that were intercepted in the Port of Manila in 2013.

On the eve of Araw ng Kagitingan, BAN Toxics, Ang Nars Partylist, Global Alliance for Incinerator Alternatives (GAIA), Ecowaste Coalition and Greenpeace staged a rally in front of the Department of Environment and Natural Resources (DENR) following its pronouncement that the illegal Canadian waste shipment will be disposed of in the country.

“In light of Araw ng Kagitingan, we can’t help but feel ashamed of our own government who are backing off to accommodate the Canadian wastes. We can’t allow any country to treat our own as their dumping ground. We must defend our sovereignty the way our heroes did. We must send these wastes back to where they belong,” said Paeng Lopez of GAIA.

“The Filipino people look up to concerned Philippine government agencies to be the hero that will uphold the nation’s sovereignty against other nation’s attempt at bringing us to our knees, to stand up to defend our rights and the law of the land, and make Canada clean up their stinking mess,” said Rene Pineda of Ecowaste Coalition

The Canadian government continues to dodge the issue by saying this is a private matter between the Canadian exporter, Chronic Inc., and its Filipino counterpart, Chronic Plastics. However, various sectors have pointed out that the illegal shipment is a violation of the Basel Convention, to which both Canada and the Philippines are parties.

“There is nothing honorable in letting the Canadian government make the Philippines its dumpsite. Whatever reason they give or however way we look at it, the dumping is illegal, improper and immoral. The Philippine government should have been firm and nor allow itself to be bullied by other nations. Doing so would not only set a bad precedent, but also show the world that our government has no backbone to defend its sovereignty. In the end, who else will the Filipinos trust to defend their rights to a safe and healthful ecology?” said Abigail Aguilar of Greenpeace.

As per the Basel Convention on the Transboundary Movement of Hazardous Wastes and Their Disposal, a United Nations treaty to which both Canada and the Philippines are parties, the illegal shipment, containing a mixture of household and toxic wastes, should be re-exported to Canada. The Basel Convention is an international treaty that regulates toxic waste and other wastes, similar to what the Canadian shipper sent to the Philippines, and prohibits illegal waste trade. The Convention requires the exporting country, in this case Canada, to take back the illegally seized shipment and to pay the costs for the return.

Apart from the Basel Convention, the importation violates a number of local laws such as the DENR Administrative Order 28 (Interim Guidelines for the Importation of Recyclable Materials Containing Hazardous Substances) and Republic Act 9003 or the Ecological Solid Waste Management Act of 2000.

The shipment has been festering in the Philippine ports for 700 days and, according to the groups’ calculations, the government is spending at least P144,000 a day for the loss of income for storage space and the additional expenses for demurrage, which, to date, costs around Php 76 million.

Last year, a petition was signed by international organizations to express their concern over the illegal waste shipment and urged Canada to take back its waste. Representatives from NGOs in several countries, including Australia, China, Germany, India, Russia, and the US, signed the letter.

In an effort to gain public attention on the issue, the coalition filed an online petition on change.org[i] that drew more than 25,000 signers, more than half of which are Canadians. The group is encouraging more people to sign the online petition to appeal and urge the Canadian embassy in the Philippines to facilitate the pick up and return of the garbage back to Canadian soil. ###