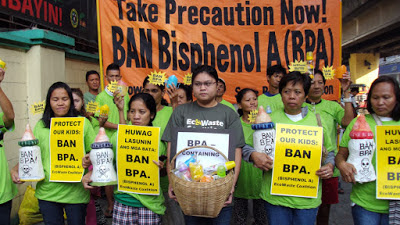 The environmental and health advocacy group EcoWaste Coalition has renewed its appeal to the government to ban plastic feeding bottles and sippy cups containing the chemical bisphenol A or BPA.

As plastic-free July is observed by various advocacy groups worldwide, the group reiterated that BPA, an industrial chemical found in polycarbonate plastics and epoxy resins, should be disallowed in baby food contact materials as a precaution against health-damaging exposure to BPA.

Exposure to BPA, a known endocrine disrupting chemical, has been associated with a number of health problems, including increased risk of breast and prostate cancer, early onset of puberty, autism, hyperactivity, and childhood obesity, the group said.

“Considering the number of baby feeding bottles and sippy cups in the market with BPA-free product labeling claim, it appears to us that manufacturers have already opted to self-regulate and to comply with the BPA ban under existing regulations in the EU, USA, China and other countries,” said Thony Dizon, Chemical Safety Campaigner, EcoWaste Coalition.

“We think there is no industry resistance to BPA being banned or removed on plastic baby feeding bottles and sippy cups.  We therefore reiterate our call on the government to take action now,” he pointed out.

As mandatory non-use of BPA in baby feeding bottles and sippy cups has to be explicitly imposed in the form of a regulation, the EcoWaste Coalition urged both the Department of Health (DOH) and the Food and Drug Administration (DOH) to fast track the issuance of the draft DOH Administrative Order, which has been pending since 2013.

To assist consumers in making an informed choice, the group further requested the FDA to issue an advisory that will publicize all duly-registered BPA-free baby feeding bottles and sippy cups that are authorized to be sold in the local market.

To help the government in its literature review, the EcoWaste Coalition last April 2019, assisted by IPEN (a global civil society network for a toxics-free future), provided the FDA with peer-reviewed scientific papers from various sources.

Most recently, it shared the 2019 report “Bottles can be toxic” published by Toxics Link, an NGO based in New Delhi, India, indicating the release of BPA from baby bottles and sippy cups in extraction experiments conducted by the Indian Institute of Technology Guwahati.

The study clearly established the presence of BPA in the samples analyzed and its migration into the baby foods in these containers.

“Presence of toxics chemicals in baby feeding bottles is a matter of serious concern and requires very stringent monitoring for adherence to standards,” Toxics Link emphasized.