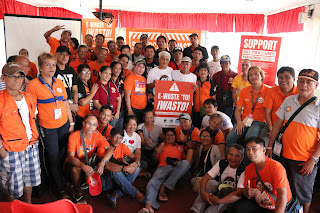 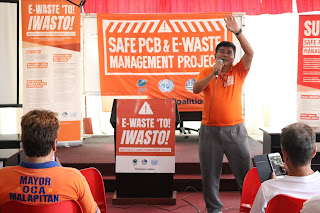 Officials of the country’s largest barangay, Bagong Silang in Caloocan City, met with purok leaders to build community awareness and support for a pioneering e-waste facility toward the safe management of discarded electronics.

Last week, on July 24 and 25, over 100 community leaders of Barangay 176 assembled at the multi-purpose hall to get themselves informed about the government-led “Safe PCB and E-Waste Management Project” that seeks, among other goals,  the environmentally-sound management of toxic polybrominated diphenyl ethers (PBDEs) in cathode ray tube (CRT) television sets.

The establishment of the e-waste facility is an integral part of the project funded by the Global Environment Facility with the United Nations Industrial Development Organization (UNIDO) as the project implementing agency and the Department of Environment and Natural Resources-Environmental Management Bureau (DENR-EMB) as the lead executing agency.

Led by Chairman Joel S. Bacolod, Barangay Bagong Silang has agreed to host the e-waste facility to promote and protect the health of residents, numbering around 315,000, from unsafe recycling and disposal practices of discarded electronics.

At the forum, Dante Lista, Chief of Barangay 176 Environmental Management and Protection Office, explained that the e-waste facility to be set up will provide concrete benefits for the people of Bagong Silang.

“This project will have at least triple benefits for our barangay.  First is the health benefit, particularly for e-waste dismantlers, due to reduced occupational exposure to hazardous substances in e-waste.  Second is the environmental benefit  resulting from the safe-management of e-waste.  And third is the livelihood benefit for the informal recyclers who will be subsequently trained and employed,” he said.

Staff of the EcoWaste Coalition, an environmental health organization, spoke at the forum about the hazards of improper e-waste handling, recycling and disposal, as well as the need for improved e-waste management practices to protect workers’ health and the environment.

Trained personnel coming from the ranks of Caloocan-based e-waste workers will help in managing the collected TVs before these are transferred for proper dismantling and recycling at a plant in Calamba, Laguna.

Organized  e-waste recyclers in the city had earlier expressed their hope for a decent and safe recycling-based livelihood with the operation of the said facility in Bagong Silang.

According to the report “A New Circular Vision for Electronics: Time for a Global Reboot," “less than 20 percent of e-waste is formally recycled, with 80 percent either ending up in landfill or being informally recycled – much of it by hand in developing countries, exposing workers to hazardous and carcinogenic substances such as mercury, lead and cadmium.”

Released in January 2019, the report published by the Platform for Accelerating the Circular Economy (PACE) and the UN E-Waste Coalition, which includes UNIDO, said that “e-waste can be toxic, is not biodegradable and accumulates in the environment, in the soil, air, water and living things.”

The report proposes collaborative efforts involving various sectors “to create a circular economy for electronics where waste is designed out, the environmental impact is reduced, and decent work is created for millions.”