BOC Pressed: Tell the People Where the Canadian Wastes in 8 Containers Went 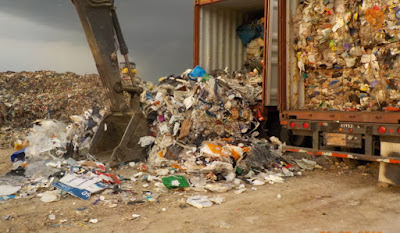 A week after the illegal Canadian garbage shipment left the country, a waste and pollution watchdog pressed the Bureau of Customs (BOC) to disclose how the other seized cargoes were disposed of.

“BOC  has to tell the people where the Canadian wastes in eight container vans went, noting that only 26 were landfilled in Kalangitan, Capas, Tarlac,” said Aileen Lucero, National Coordinator, EcoWaste Coalition.

“Full disclosure is important to clear the air as we pursue a complete ban on foreign waste importation and disposal to protect the public health and the environment from the negative effects of the global waste trade," she said.

The group raised the matter to the BOC through an e-mail sent last April 30.  In his response, BOC Spokesperson Erastus Sandino Austria confirmed that out of the 103 shipping containers of Canadian garbage, 34 were locally disposed of. The remaining 69 containers were shipped back to Canada on May 31 on board MV Bavaria.

On May 15, the EcoWaste Coalition filed an online Freedom of Information request to press the BOC to divulge information pertaining to the local disposal of the 8 containers, which the group also forwarded to Austria.

Austria then referred the matter to the “BOC-focal person on the Canada Wastes matter thru the Inter-agency Committee Secretariat of the Bureau of Customs for their appropriate action.”

“Rest assured that the matter is being looked into and verified with concerned offices,” wrote Customs Operations Officer Genilyn Minardo in response to the forwarded message by Austria from the EcoWaste Coalition.

The slowness in getting the requested information, which should be readily available in the BOC database, is making environmental advocates more curious as to how and where the wastes in eight containers were disposed of.

“Were the mixed plastic wastes incinerated or used as fuels in cement kilns.  We are concerned as the burning of unsorted wastes, especially those containing chlorinated and hazardous materials, can produce harmful environmental pollutants such as dioxins,” said Sonia Mendoza, Chairman, Mother Earth Foundation.

“Were the wastes buried in any of the landfills in Luzon, particularly in Bulacan, Rizal and in Navotas?  If the wastes were landfilled, did the concerned local government unit approve of it or were they even notified?,”  asked Noli Abinales, Founder, Buklod Tao.

According to the website of the Metro Clark Waste Management Corp., wastes from the 26 containers shipped by Canadian firm Chronic Plastic Inc. were disposed of in their landfill facility in Tarlac.

In reaction to the dumping of Canadian garbage, the Tarlac Provincial Board adopted Resolution No. 057-2015 banning the dumping of any garbage from overseas at the Kalangitan landfill and anywhere in Tarlac.