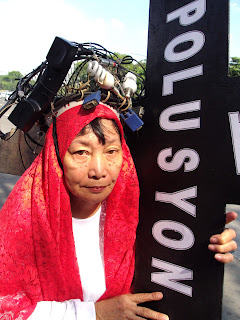 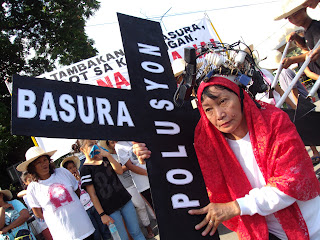 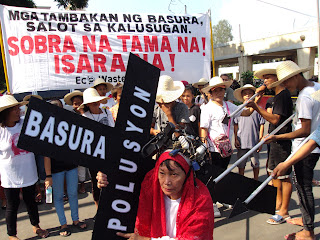 As the Holy Week unfolds, a waste and pollution watch group today performed the Stations of the Cross under the heat of the sun to draw attention to the need for ecological conversion to protect the Mother Earth from further degradation.

With plastic and electronic wastes and the illegal dumpsites across the country in the spotlight, eco-volunteers belonging to the EcoWaste Coalition observed the Holy Wednesday by reflecting on the sufferings of Mother Earth due to our wasteful practices.
Among those who participated in the penitential act were community-based members of the Gulayan People's Neighborhood Association, Inc. and Piglas Kababaihan.

At each of the 14 stations from Quezon City Hall to the Office of the Ombudsman, the participant recalled the Passion of Christ, reflected on the garbage woes of our times and recited prayers for mercy and forgiveness.

The EcoWaste Coalition chose to conclude the penitential act at the Office of Ombudsman to express its full support to the agency’s efforts to probe and prosecute local government officials for violation of Republic Act 9003, the Ecological Solid Waste Management Act.

To dramatize the sufferings of Mother Earth, a female activist wearing a crown of busted mercury lamps, phones, battery chargers and other e-wastes carried the cross on her shoulders.  On the cross were written the words “basura” and “polusyon.”

As she carried the cross from one station to the next, “Roman soldiers” donning headgears filled with the ubiquitous plastic bags tormented Mother Earth with a whip made out of e-waste.

“The hundreds of dumpsites that dot our cities and towns are sad and ugly reminders of how we have disregarded our responsibility as stewards of God’s creation,” said Ochie Tolentino, Zero Waste Campaigner, EcoWaste Coalition.

“These dumpsites have become the modern Calvary where our Mother Earth is crucified every day and where discarded food leftovers, plastics and e-waste, are buried between layers of soil,” she noted.

“Through our penitential act today, we call attention to the cry of Mother Earth against the pains inflicted on her land, water and air by our penchant to consume more and throw even more,” she said.

“With this walk of faith, we say sorry for what we have done as we pray for the ecological conversion of every person, household, institution, business and industry to reverse the tide of environmental destruction,” she added.

Columban priest Fr. John Leydon, Chairperson of the Global Catholic Climate Movement -Pilipinas, who also joined the event, stated: “As stewards of God’s creation, we have the shared responsibility to care for the Earth, which, according to Pope Francis, is turning into ‘an immense pile of filth.’  We need to counter the rising crass consumer mentality and culture of waste with what Pope Francis calls 'a bold cultural revolution.'  He also calls us all to undergo 'ecological conversion' so that we can become proper carers of 'our common home'."

R.A. 9003, among other things, requires the closure and rehabilitation of open and controlled dumpsites in February 2004 and February 2006, respectively.

“We expect the Ombudsman to underscore LGU compliance to the required closure and rehabilitation of dumpsites and the full enforcement of R.A. 9003 through the filing of criminal and administrative charges against erring officials this year,” the group said.