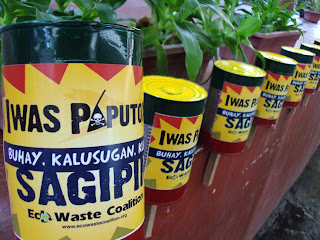 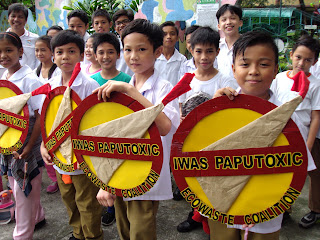 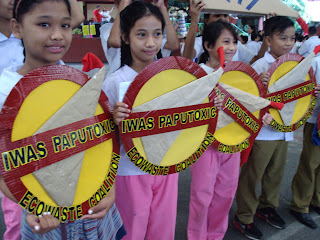 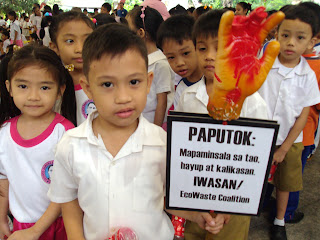 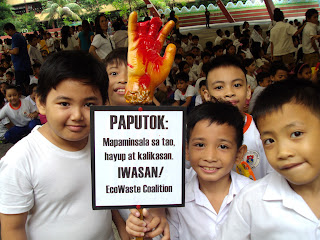 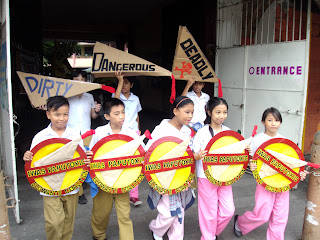 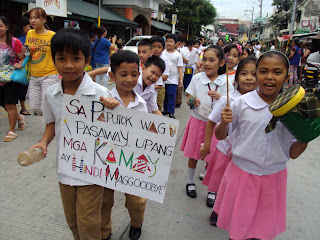 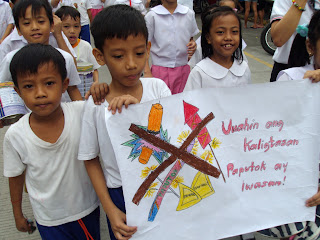 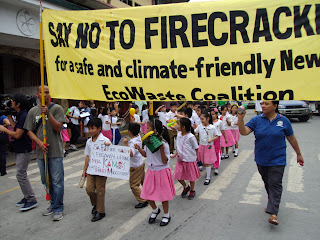 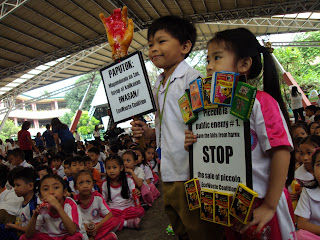 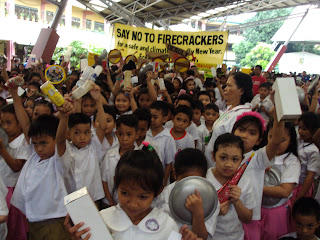 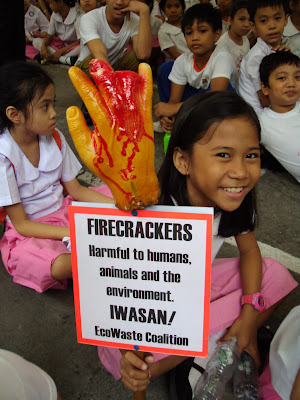 As schools get ready for the annual school Christmas closedown beginning late next week, a health and environmental watch group reached out to young students to warn them against the hazards of lighting firecrackers during the holidays.

Today, December 14, the EcoWaste Coalition organized a well-attended awareness-raising drive to encourage the students of the Jacinto Zamora Elementary School (JZES) in Pandacan, Manila to spurn firecrackers and opt for alternative noisemakers to herald the New Year.

Joining the event which gathered over 1,000 students from Kindergarten to Grade VI were 2016 Miss Philippines Earth - Ecotourism Melanie Mader, Department of Health Spokesperson Dr. Eric Tayag and representatives from the Department of Education, Bureau of Fire Protection and the Philippine National Police.

JZES Principal Angelina Mojica warmly welcomed the visitors to the school, which was adjudged Regional Winner and National Finalist under the Elementary School Category of the 2015 National Search for Sustainable and Eco-Friendly Schools.

“Firecrackers are not toys for young children to play with,” stressed Aileen Lucero, National Coordinator, EcoWaste Coalition, who pointed out that “firecrackers are dangerous, deadly and dirty” and “a total waste of money for a few minutes of toxic revelry.”

“To stop the tragic injuries and deaths, the destructive fires, the hazardous pollution, and the acoustic torture against animals due to firecrackers, we appeal to the general public to welcome 2017 in a safe and eco-friendly way without firecrackers,” she said.

“I join the DOH and the EcoWaste Coalition in requesting the public, particularly the parents and their kids, not to light firecrackers anymore and to celebrate the beginning of a New Year with the health of their family members and neighbors and the well-being of Mother Earth in mind,” said beauty queen Mader.

The delayed issuance of President Rodrigo Duterte’s Executive Order imposing a national ban on firecrackers should not discourage communities and families from welcoming the New Year sans firecrackers, the EcoWaste Coalition said.

“It’s high time for every Filipino to assert our right to breathe clean air, especially on New Year’s Eve and on New Year’s Day.   It’s time for us to claim our right not to be exposed to toxic pollutants and wastes from firecrackers,” she further said.

With a more animated and sustained campaign at the community-level against piccolo and other firecrackers, the country’s cities and municipalities can significantly reduce firecracker-related damage to health and the environment, the EcoWaste Coalition said.

In lieu of firecrackers and fireworks, the group encouraged the public to go for substitute noisemakers that can be made out of common household materials and recyclable junks.

During the event, JZES students showed some of these alternative noisemakers, including: recycled maracas from empty pineapple juice cans, recycled tambourine from flattened softdrink crowns, improvised cymbals using pot lids and assorted shakers made from used product containers that were filled with coins, pebbles or seeds.

Finally, the EcoWaste Coalition urged households, business establishments and big corporations to divert funds earmarked for firecrackers and fireworks to worthy charities and causes instead.

“Don't burn away your money, buy food or give it to charity!,” the group said.

Susan said…
Celebrity net worth is a website which reports estimates of the total assets and financial activities of celebrities. Read it for more information.
Wednesday, May 19, 2021