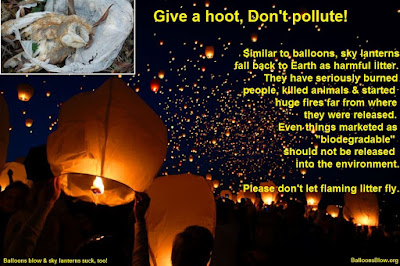 
An environmental and health non-government organization today urged the local government and fire authorities to issue a stern warning against the use of sky lanterns during the holidays.

The requested fire hazard warning will be in line with Section 10.5.4.3 on the “prohibition on open burning” under the Fire Code of the Philippines, the group said.

The Fire Code prohibits “burning using any materials in any quantities which shall cause the emission of toxic and poisonous fumes,” as well as “depositing hot ashes or cinders, or smoldering coals, or greasy or oily substances liable to spontaneous ignition, into any combustible receptacle.”

“Sky lanterns can get out of control and fall on combustible surface and cause a fire that can damage properties and even claim innocent lives,” said Thony Dizon, Coordinator, EcoWaste Coalition’s Project Protect.

Dizon recalled that a family of seven people died in Barangay Bungad, Quezon City on December 25, 2012 due to a fire reportedly caused by a sky lantern.

The EcoWaste Coalition is also concerned that sky lanterns being sold by some retail outlets or being offered online for P20 for 100 pieces and up may contain asbestos, a hazardous material.

The group recalled that between 2011-2013 the governments of France, Ireland and United Kingdom withdrew from the market some sky lanterns because “the string in the product contains chrysotile asbestos.”

According to an advisory by the French government in 2013, “the product poses a risk of burns and fire because the paper of the lantern is not fireproof.  Moreover, it poses a chemical risk because the string in the product contains asbestos fibers.”


“It’s hard to say if the sky lanterns sold online or in local retail stores are asbestos-free.  Consumers would not be able to know if the string of the sky lantern has asbestos or not as this can only be detected through specific laboratory tests,” Dizon said.

“As a precaution against fire as well as potential asbestos exposure, we appeal to the public not to lit sky lanterns during the holidays for safety sake,” he added.

Susan said…
Places you need to visit in 2020? Upgrade your travel photos with these lightweigh camera that pack a punch. Enjoy the world 's best reviews to travel with Things to do.
Friday, May 07, 2021