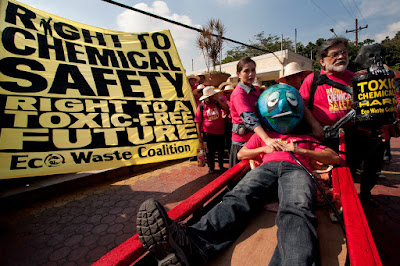 A watchdog group for environmental health and justice has called upon the various sectors, particularly the government and the industry, to rally behind the move by the Commission on Human Rights (CHR) to uphold the people’s right to live in a toxic-free society.

The EcoWaste Coalition issued the statement as hundreds of government, industry and civil society stakeholders gather in Geneva, Switzerland on September 28 to October 2 for the fourth International Conference on Chemicals Management (ICCM4) organized by the United Nations Environment Programme.

The group had collaborated and supported the CHR in crafting “The People’s Right to Chemical Safety: A Fifteen-Point Human Rights Agenda,” which the Commission then chaired by Loretta Ann Rosales issued in November 2014.

“As the national human rights institution, the CHR made the just decision to affirm the irrefutable right of every Filipino, including those yet to be born, to be protected against the risks and hazards caused by toxic chemicals,” said Thony Dizon, Coordinator of the EcoWaste Coalition’s Project Protect.

“While the CHR will not be present at ICCM4, we hope that delegates will take cognizance of their commitment to chemical safety and reciprocate with bold global actions that will help eliminate the harms caused by toxic chemical exposure, especially to children, pregnant women, farmers, workers and other vulnerable groups,” he said.

The CHR stated that “we do not need another Bhopal or Fukushima tragedy to remind us of the adverse effects of (toxic) chemicals to life, health and the environment” as it pushed for “health-based and human rights-based policies on chemicals that will guarantee our people’s right to chemical safety.”

Towards a toxic-free society, the CHR sought stakeholders’ support to translate the 2020 goal of the Strategic Approach to International Chemicals Management (SAICM) into a national policy and plan of action.

The SAICM 2020 goal refers to “the achievement of the sound management of chemicals throughout their life cycle so that, by 2020, chemicals are produced and used in ways that minimize significant adverse impacts to human health and the environment.”

In adopting the 15-point human rights agenda for chemical safety, the CHR cited the paramount importance of applying the principles of precaution, pollution prevention, public participation, polluter pays, sustainable development, environmental justice and other key elements of chemical safety such as green design, toxic use reduction and substitution, “no data, no market,” and freedom of information.

In response, the EcoWaste Coalition confirmed its commitment to popularize the CHR’s human rights agenda for chemical safety, which include “zero waste resource management,” by developing a robust program to promote and support it.

“With the current administration about to end next year, we plan to initiate a process that will develop a chemical safety platform for our new leaders to take on, building on our campaign gains and the CHR’s human rights agenda,” Dizon said.

Among the measures being espoused by CHR to promote chemical safety include the compulsory labeling of chemical ingredients in products, the implementation of the Globally Harmonized System of Classification and Labeling of Chemicals (GHS), the establishment of mandatory and publicly accessible Pollutant Release and Transfer Register (PRTR) and the phase-out of lead in paints.

The CHR also called on national and local authorities "to actively promote zero waste resource management and reject polluting technologies such as incinerators and its variants that burn resources, undermine recycling and recycling jobs, and contaminate communities with health-damaging pollutants.