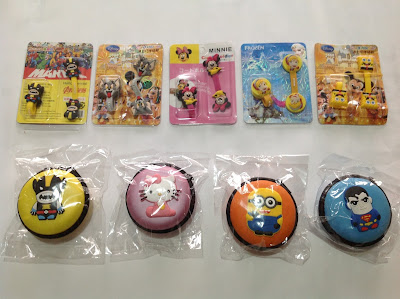 Some colorful earphone cases and cord holders being sold in Divisoria may not be suitable for kids due to their high lead content.

The EcoWaste Coalition, a chemical safety advocate, urged consumers to exercise caution when buying accessories for e-gadgets that are made of polyvinyl chloride (PVC) plastic or with PVC adornments.

The group on Sunday bought five types of cute round earphone cases with zipper and found the embossed PVC cartoon characters on four of these cases laden with high levels of lead ranging from 732 to 1,469 parts per million (ppm). The earphone cases were procured from a sidewalk vendor in Juan Luna St. for P50 each.

The group also detected lead between 631 to 2,062 ppm in all five cord holders made of PVC with Disney cartoons and super heroes.  The cord holders were obtained from a discount store at 168 Shopping Mall.

The group used a handheld X-Ray Fluorescence device to screen the products for toxic metals.

“Curious kids may play with these attractive e-gadget accessories as if these were toys and innocently put these in their mouths, exposing them to lead, a chemical poison,” he warned.

Lead can harm the brain and the central nervous system and damage other body organs, with children under six most at risk.  The World Health Organization (WHO) has listed lead as one of the “ten chemicals of major public health concern.”

Some of the consequences  of   brain  injury  from  exposure  to  lead  in  early  life, according to the WHO, are loss  of   intelligence,  shortening  of   attention  span  and  behavioural problems.

The EcoWaste Coalition also warned that PVC plastic accessories may contain other chemical ingredients such as phthalates that can get into a child’s body by biting or chewing on it.

To prevent exposure to lead and other chemical poisons in PVC, the group urged consumers to avoid plastic products bearing the number “3” or the letters “PVC” or the word “vinyl.”

To encourage manufacturers’ compliance to the government’s Chemical Control Order for Lead and Lead Compounds, which prohibits the use of lead in the production of school supplies and toys, the group advised safety-conscious consumers to go for duly-labeled and registered non-toxic children's products.

The EcoWaste Coalition also advised the public to dispose of unwanted PVC products with caution.

Burning PVC plastic waste will cause the release of extremely harmful by-product pollutants such as dioxins and furans, which belong to some of the most toxic chemicals known to science, the group warned.