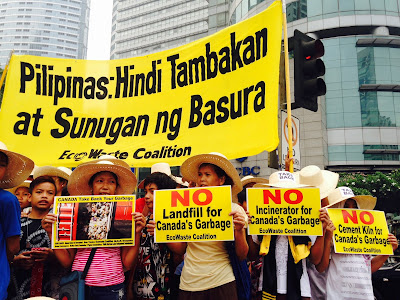 An environmental watchdog group welcomed the legal action taken by customs authorities against the importer of 48 shipping containers of misdeclared plastic scraps from Canada.

The Bureau of Customs (BOC) today sued Pampanga-based Live Green Enterprises for the illegal importation of heterogenous municipal garbage from Canada, a move that was welcomed by the EcoWaste Coalition, a staunch anti-dumping advocate.

“We welcome BOC’s legal action against the garbage importer that we hope will be expeditiously tackled by the proper court,” said Aileen Lucero, Coordinator of the EcoWaste Coalition.”

“The court, we pray, should order the importer to immediately re-export the garbage to Canada and set a unequivocal ruling that will severely castigate and punish any attempt to make our country into a global trash bin,” she added.

On Thursday, BOC sued Nelson Manio of Live Green Enterprises for violation of Sections 3601 of the Tariff and Customs Code of the Philippines and the DENR Administrative Order 1994-28, or the “Interim Guidelines in the Importation of Recyclable Material Containing Hazardous Substances."

DENR A.O. 1994-28 states that “no importation of heterogenous and unsorted plastic materials shall be allowed” and that “all plastics should have no traces of toxic materials.”

In their letter to the BOC and the Environmental Management Bureau on this matter last June 25, the EcoWaste Coalition urged both agencies “to push for the immediate return of the botched garbage shipments for environmentally-sound disposal in Canada.”

“Allowing the landfilling of Canadian garbage into our soil would send a very wrong and dangerous signal to waste traders that the Philippines, despite the legal restrictions, is an open place where the refuse of affluent societies masked as ‘plastic scraps’ can be sent for disposal,” the group said.

Shipping back the illegal garbage imports from Canada, the group said, “will demonstrate that our government means business when it comes to protecting the public health and the environment from illegal waste trade.”

The group also urged BOC “to pay keen attention on the entry of materials described as ‘recyclable plastic scraps,’ which could be a smokescreen for the illegal entry of residual ‘wastes collected from households,’ which are also covered by the Basel Convention, along with other categories of hazardous wastes.”

The Basel Convention on the Control of Transboundary Movements of Hazardous Wastes and Their Disposal, of which the Philippines is a party, recognizes “that any state has the sovereign right to ban the entry or disposal of foreign hazardous wastes and other wastes in its territory.”