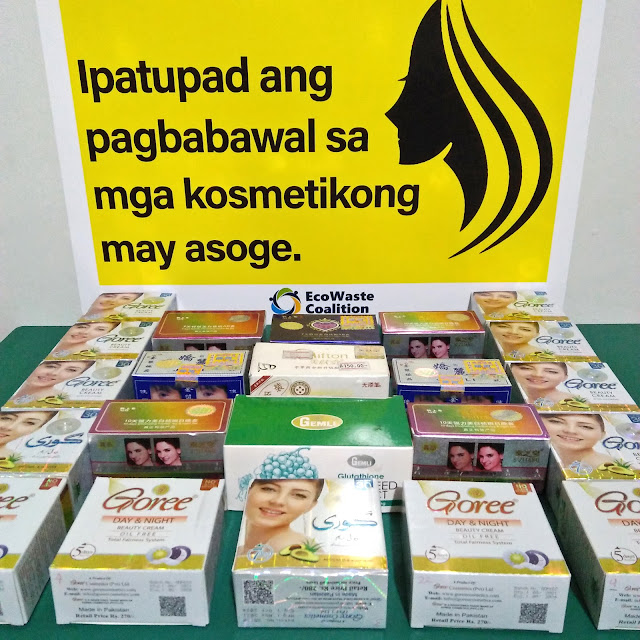 An advocacy group for a zero waste and toxics-free society is urging re-elected Laguna Governor Ramil Hernandez to stop the illicit trade of mercury-containing cosmetics in the province to protect his constituents and the environment.
In a letter e-mailed yesterday, the EcoWaste Coalition alerted the governor’s office about the unlawful sale in Laguna of banned skin whitening products containing highly toxic mercury, a chemical prohibited in cosmetic products such as skin lightening creams, lotions and soaps.
“This is a brazen violation of a globally agreed phase-out by 2020 of cosmetics such as skin whitening products with mercury content above one part per million (ppm) under the Minamata Convention on Mercury,” said Aileen Lucero, National Coordinator, EcoWaste Coalition.  “We urge Governor Hernandez to act promptly to address this threat to public health and the environment.”
The toxic alert came on the heels of the group’s latest test buy operations that netted 22 mercury-laced skin whitening creams sold by cosmetic dealers in eight local government units (LGUs), namely the municipalities of Los Baños and Sta. Cruz and the cities of Biñan, Cabuyao, Calamba, San Pablo, San Pedro and Sta. Rosa.
In test buys conducted on May 20 and 21, the group obtained 22 Gemli, Goree, Jiaoli, Mifton and S’Zitang skincare products illegally imported from China and Pakistan and sold locally at beauty and herbal product stores for P100 to P300 each.
These products are among the over 150 skin whitening cosmetics banned by the Food and Drug Administration (FDA) for lacking market authorization and/or for containing mercury above the maximum limit of 1 ppm as per the ASEAN Cosmetic Directive and the Minamata Convention, the group said.
Using a portable Olympus Vanta M Series X-Ray Fluorescence (XRF) analyzer, the group detected mercury above the 1 ppm limit in all the 22 samples.  The 13 Goree products, in particular, were found to contain extremely high levels of mercury from 26,340 to 29,370 ppm.
To protect Laguneños, especially the women and children, from the harmful effects of mercury exposure, the EcoWaste Coalition requested Governor Hernandez to take the following measures:
In their letter to the provincial government, the EcoWaste Coalition also emphasized that mercury in cosmetic products will eventually find its way in the environment, including waste water and water bodies, and thereby contaminating the water system and the food supply with this highly toxic substance.
According to the World Health Organization, “mercury use in cosmetic products can have adverse effects including skin rashes, discoloration and scarring, and can reduce skin’s resistance to bacterial and mycotic disorders.”
“Direct and prolonged exposure through the skin during repeated applications can cause damage to the brain, nervous system and the kidneys,” it said.
WHO has warned that “mercury-containing skin lightening products are hazardous to health.”
Email Post