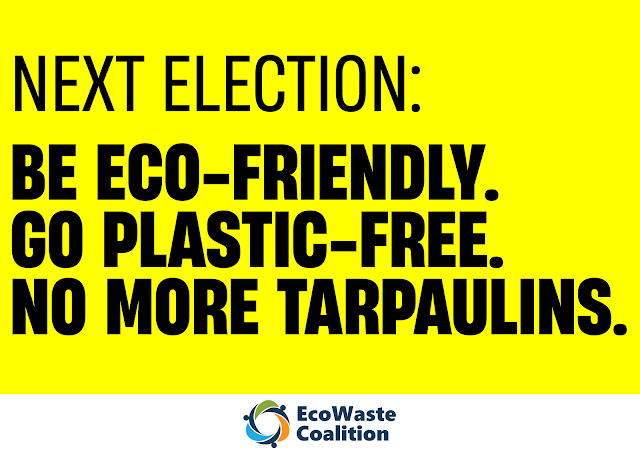 After asking candidates to take down their campaign materials following the May 9 elections, the EcoWaste Coalition is now asking winners not to hang new plastic tarpaulins to thank their supporters.
In lieu of wasteful tarpaulins, politicians can express their gratefulness by joining cleanup operations, supporting tarpaulin upcycling for non-food and non-child uses, and by planting trees, the environmental watchdog group suggested.
“The post-election cleanup has yet to be completed and we are already seeing newly printed ’thank you’ tarpaulins in some places,” observed Aileen Lucero, National Coordinator, Ecowaste Coalition. “Enough of ‘tarpolitics,’ we are already drowning in plastics.”
“We can expect another garbage overload if all the proclaimed winners will put up their ’thank you’ tarpaulins individually or as a group,” she pointed out.
”We need to put a cap to the thoughtless use of tarpaulins, especially for political and other non-essential purposes, as these materials contain hazardous chemicals and are not easily recycled or disposed of,” she added.
Tarpaulins, which are often made of polyvinyl chloride or PVC plastic, may contain toxic chemical additives such as cadmium, lead and  phthalates.
Laboratory tests commissioned by the EcoWaste Coalition and performed by SGS on six presidential campaign tarpaulins, including that of presumptive President Ferdinand Marcos Jr., found cadmium in all the analyzed samples.
“As plastic tarpaulins are neither banned nor regulated, we can only appeal to our politicians to control their penchant to ‘tarpolize’ anything and everything,” Lucero said.
The unrestrained use of tarpaulins before, during and even after the electoral campaign should prompt the authorities into regulating these ubiquitous plastics, according to the group.
“In future elections, let us be environmentally responsible and go plastic-free.  No more tarpaulins, please,” the EcoWaste Coalition pleaded.
Email Post