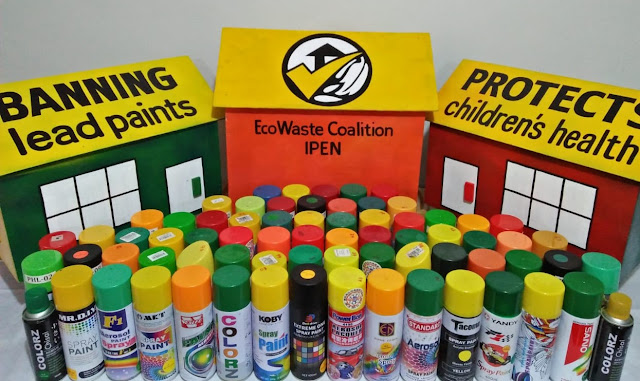 The toxics watchdog group EcoWaste Coalition has commended some retail stores for taking action against spray paints containing violative levels of lead, a toxic chemical banned in the manufacture of paints and similar surface coatings.

The action by concerned retailers, as well as distributors, will go a long way in protecting human health from lead exposure for which the Philippines bagged the prestigious Future Policy Award (special category on lead paint) as announced by the World Future Council last June 29, the group said.

The country's lead paint regulation as contained in the DENR-issued Chemical Control Order for Lead and Lead Compounds, along with four other hazardous chemical policies from Colombia, Kyrgyzstan, Sri Lanka and Sweden, will be formally recognized today through a high-level virtual Award Ceremony.

“As the country’s lead paint policy is globally recognized, we wish to cite local retail stores for taking lead-containing spray paints off the shelves as we have requested.  Their action will surely contribute to protecting our children and workers from the adverse effects of lead poisoning,” said Manny Calonzo, Adviser, EcoWaste Coalition.

“We also would like to seize the occasion to emphasize that more still needs to be done to ensure that only lead-safe paints are sold in the market, including online shopping platforms. The government, in particular, has to strengthen its compliance monitoring and enforcement efforts to purge the market of errant paint products, including old stocks of leaded paints sitting on the shelves or in the bodegas as well as illegal lead paint imports,” he said.

To recall, the EcoWaste Coalition for its latest market investigation bought a total of 130 samples of bright color spray paints, which it screened for lead with a handheld X-Ray Fluorescence (XRF) device.  Samples that failed the 90 parts per million (ppm) maximum limit were then sent to SGS, a global testing company, for confirmatory lead content analysis.

None of these 71 leaded spray paints discovered by the EcoWaste Coalition was produced by companies belonging to the Philippine Association of Paint Manufacturers (PAPM), the group noted.

Upon written notification by the watchdog group, spray paint retailers Citi Hardware, Divimart, MR. D.I.Y. and Unitop Department Store confirmed in writing that they have pulled out the spray paint products in question from their stores.

The EcoWaste Coalition had also urged concerned retailers and distributors to return the leaded items to their suppliers for environmentally sound disposal.

“Dust and soil contaminated with lead that gets onto children’s hands and mouths is the major pathway by which lead in paint contributes to their exposure to this chemical poison early in life,” explained environmental health scientist Dr. Geminn Louis C. Apostol, Assistant Professor at the Ateneo School of Medicine and Public Health.
“Lead exposure can cause debilitating and lingering health effects in all people, but it is much more harmful to young children whose brains and bodies are still developing,” he said, adding “exposure to lead early in life can cause developmental delay, reduced intelligence, shortened attention span, learning difficulties, poor school performance, and behavioral problems.”
The FPA 2021 virtual Award Ceremony can be viewed on youtube on July 6 from 9:00 pm: https://www.youtube.com/channel/UCvbZ7TWDlBUeuKMRQCBmiSw
Reference:
https://www.worldfuturecouncil.org/future-policy-award-winners-announced/
https://chemical.emb.gov.ph/wp-content/uploads/2017/03/DAO-2013-24-CCO-Lead.pdf
Email Post