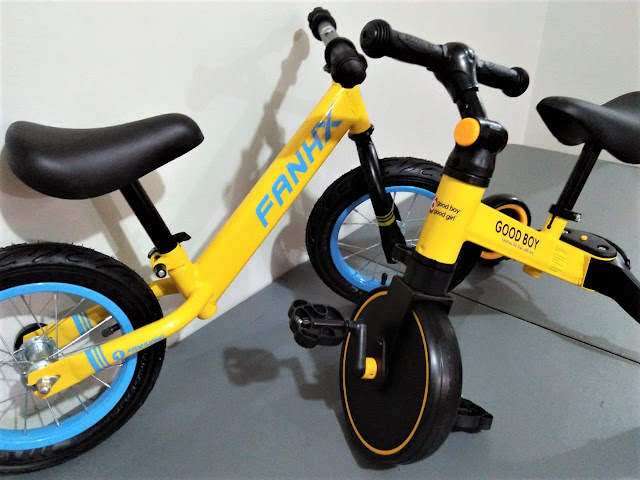 A toxics watchdog group has rung the alarm bell to warn consumers, especially parents and their young ones, to be careful in choosing bicycles as some products may be coated with lead paint, a major source of lead poisoning in children.
Coinciding with the observance of the World Bicycle Day on June 3 as declared by the UN General Assembly in 2018, the EcoWaste Coalition has released the results of its latest investigation on lead paint hazard targeting bicycles marketed for young children 1.5 to 6 years old.
“Biking is a fun and healthy exercise for kids that can help in their physical fitness and development,” said Thony Dizon, Chemical Safety Campaigner, EcoWaste Coalition. “Our discovery of health-damaging lead paint in some bicycles is very concerning as children can be exposed to lead if they pick up and eat flaking paint chips from a lead coated bike, or ingest or breathe in lead dust.  Bikes and all other children’s products must be completely safe from lead and all forms of hazard.”
"Bicycles, especially those marketed for children's use, must strictly conform to product quality and safety standards, including the use of lead-safe paints. Kailangang matiyak ang kalusugan at kaligtasan ng mga bata sa kanilang pagbibisikleta," said Fred Valenzuela, President, Cycling Residents of Industrial Valley (CRIV), a member of the EcoWaste Coalition.
“Dust and soil contaminated with lead that gets onto children’s hands and mouths is the major pathway by which lead in paint contributes to their exposure to this chemical poison early in life,” added environmental health scientist Dr. Geminn Louis C. Apostol, Assistant Professor at the Ateneo School of Medicine and Public Health. “While the primary target is the brain and the central nervous system, lead exposure can also cause damage to other vital organs.  There is no level of lead exposure that is deemed safe and without harmful effects to health.”
For this study, the group purchased seven bright colored bicycles for kids costing P540 to P2,300 each from bike stores in Quiapo, Manila and from online traders.  The group screened the brightly painted parts of the bicycles for lead using a handheld X-Ray Fluorescence (XRF) device and then sent those that screened positive for lead to a private laboratory for confirmatory tests.
Out of the seven kiddie bicycles, two samples were found decorated with yellow lead paint that exceeds the regulatory limit of 90 parts per million (ppm) as stipulated under the DENR Administrative Order 2013-24, or the Chemical Control Order for Lead and Lead Compounds.  None of the four samples obtained from Quiapo vendors screened positive for lead. Two of the three samples purchased from online dealers were found to be coated with lead paint.
According to the tests conducted by the Philippine Institute of Pure and Applied Chemistry  (PIPAC), an independent and not-for-profit scientific institution, the Good Boy/Good Girl Bicycle had 6,850 ppm of lead, while the FANHX Bicycle had 6,950 ppm. The samples were analyzed using an ashing-acid digestion/inductively coupled plasma spectrometry  method.  FANHX was obtained from a Lazada seller, while Good Boy/Good Girl was purchased from a Shopee dealer. Both products are "made in China" as indicated on the packaging.
The non-detection of lead on the five other samples is concrete proof that bicycle manufacturers are capable of decorating their products with paints that do not pose lead hazard to vulnerable groups, the EcoWaste Coalition pointed out.
“Young children are particularly vulnerable to the toxic effects of lead and can suffer profound and permanent adverse health effects, particularly affecting the development of the brain and nervous system,” warned the World Health Organization (WHO), explaining that “young children are particularly vulnerable to lead poisoning because they absorb 4–5 times as much ingested lead as adults from a given source.”
WHO added that “children’s innate curiosity and their age-appropriate hand-to-mouth behaviour result in their mouthing and swallowing lead-containing or lead-coated objects, such as contaminated soil or dust and flakes from decaying lead-containing paint.”
The EcoWaste Coalition has already notified the Food and Drug Administration (FDA), the regulatory agency in charge of toys and childcare articles, about its findings.
To protect children from lead exposure, the group has requested the agency to put a stop to the online sale of bicycles tainted with lead paint.
“Considering the limited number of samples that we can buy and subject to lead paint analysis, we urge the FDA to conduct a wider sampling of children’s bicycles being sold offline and online,” the group suggested. “Our children deserve nothing less than lead-safe and non-hazardous toys,” the group also asserted.
DENR A.O. 2013-24, or the Chemical Control Order for Lead and Lead Compounds, bans the use of lead, a toxic chemical, in the manufacture of paints and other products such as toys.
The Environmental Management Bureau (EMB), through Memorandum Circular 2016-010, further clarified that the use of paints with more than 90 ppm of lead in the manufacture of toys and related products is prohibited after December 31, 2016.
Reference:
https://www.who.int/news-room/fact-sheets/detail/lead-poisoning-and-health
https://chemical.emb.gov.ph/wp-content/uploads/2017/03/DAO-2013-24-CCO-Lead.pdf
https://chemical.emb.gov.ph/wp-content/uploads/2017/03/MC-2016-010.pdf
Email Post